February 15, 2009
Last week markets rose on hope - hope that the new Treasury secretary had a plan that would save the banking system and put a floor under stock prices. The plan was announced on Tuesday and the markets gave it the big raspberry. There was a lack of detail, a failure to advance any radically new concepts and, as Barry Ritholtz said, no free gifts for Wall Street. Washington tried to lift markets again on Thursday by leaking word that a new plan was being considered that would subsidize mortgage payments for those in danger of foreclosure. This resulted in a big rally that erased a 3% drop and allowed markets to more or less finish flat. Nevertheless, when all was said and done, stocks lurched lower as major averages fell between 3% to 5% on the week.

On the economic front, there were some mixed messages this week on Thursday. Jobless claims came in above 600,000 again (yikes!) but there was a better than expected retail sales report. There was some debate on just what the retail report signified. Some said it showed that consumers were still willing to spend, albeit at a rather modest rate. Others said it merely showed that retailers were taking a beating by selling at deep discounts. Some pointed to the fact that year-over-year, spending was down over 9% so a slight month-over-month increase is nothing to get excited about. In any case, investors pretty much ignored the report and went about the business of selling stocks until the news came from Washington on the mortgage subsidies.

A big non-event this week was the appearance of the big bank CEOs appearing before the House Finance Committee. The Wall Street Journal's Deal Journal blog had a hilarious take on this as they live-blogged the proceedings. I encourage you to read it. It takes away any confidence you may have had that Washington is up to the task of fixing our economy.

As a result, it is no wonder that our TradeRadar statistics sagged a bit this week. This week shows the number of stocks above their 20-day moving average has drooped again. The good news is that stocks haven't fallen enough to reduce the number of stocks above their 50-day MA. So while there is clearly weakness in the markets (see how SPY is continuing to rack up lower highs) at least there isn't wholesale panic selling. Indeed, the NASDAQ has held up much better than the S&P 500 and indicates there are pockets of strength out there even as stocks overall end the week on a lower note. 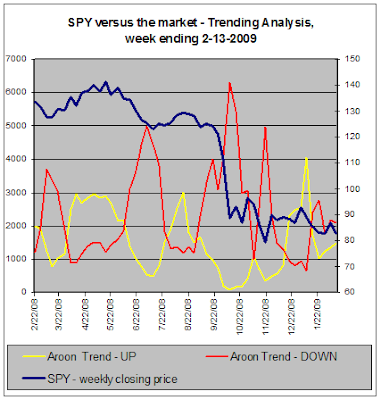 Here we also see a slight improvement, I must emphasize "very" slight improvement in the indicators. A few more stocks are exhibiting up-trends and a few less are exhibiting down-trends. The take-away here is that the number of stocks in down-trends is not at a high level but the number of stocks in up-trends is pretty dismal, too. Stocks just seem to be gyrating around and going nowhere.

As we've compared our indicators to SPY, the S&P 500 SPDR ETF, it is worth taking a look at its chart with a few annotations. 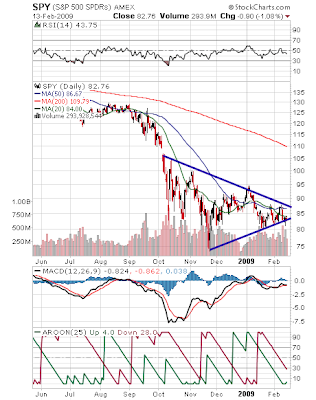 We've been drawing triangles on the chart of SPY for weeks now but the ETF just can't seem to break out one way or the other. Things are certainly looking pretty sketchy now as prices are hugging the bottom line of the triangle. One good shock and we could easily see a breakout to the downside. Note that the Aroon indication is firmly bearish and the 20-day MA has again crossed below the 50-day MA. This is not a very encouraging chart.

On the other hand, it is only fair to include a chart of QQQQ, the Powershares NASDAQ 100 ETF. This chart looks like a nice recovery is under way. Note how Aroon is almost the opposite of what we saw on the chart of SPY; ie, in the case of QQQQ it is looking bullish. 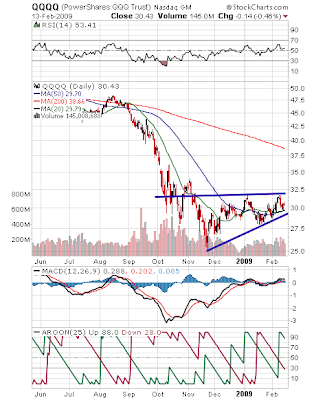 Washington continues to prop up the stock market by announcing what seems like a plan a week. At some point, investors will stop reacting to plans and begin to wait for results. This seems to be happening with the stimulus package. It passes votes in Congress but the market just shrugs.

It was another big week for earnings but they were not particularly encouraging as many companies continue to provide reduced guidance and a good number announce layoffs.

We also have another reasonably busy earnings week. Notable companies include Wal-Mart, Comcast, Deere, Hewlett-Packard, GM, Brocade and a selection of energy companies and gold miners.

So what surprises does this shortened week hold in store? It seems that the market lurches from event to event. I am thinking no one needs economics or technical or fundamental analysis anymore; investors would do just as well with a crystal ball. Certainly, looking at charts doesn't help. SPY is down and QQQQ is up. Which will prevail?