February 03, 2009
It's been about a week and a half since I wrote the first Tech Bellwether Earnings Scorecard post. Since we are still in the midst of a busy earnings season, I thought it was time for an update.

Below I have listed some of the big names in the tech world along with comments on whether they beat expectations, posted losses or gains and whether they provided positive forward guidance.

As in the first post, the majority of companies are not doing to well and have low expectations. Whereas the last post could point to a few companies that provided good guidance, this week's sampling has only one - Amazon. The other companies either withdrew guidance entirely or offered weak guidance.

So does that mean tech stocks are plunging? Far from it.

Below is the chart of XLK, the Technology Select Sector SPDR ETF. Rather that showing a serious decline, it is more or less muddling along in a trading range and even closed above its 50-day MA today. 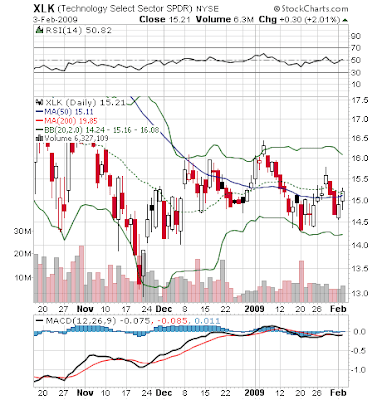 Even more startling is the following chart. This shows XLK in relation to SPY, the S&P 500 SPDR ETF. 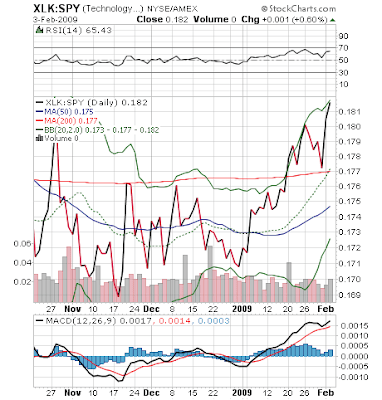 It can be seen that tech is clearly outperforming the S&P 500. Given that the S&P 500 is weighed down with banks, I checked the performance of XLK relative to the Russell 3000 (using IWV, the iShares Russell 3000 Index ETF that attempts to capture the performance of the broad U.S. equity market) and the out-performance of XLK is even more pronounced. In IWV, tech is the second largest sector, comprising 14.6% of the ETF's holdings and yet tech by itself is still out-performing.

So it appears we are in a mode here where the bad news is being ignored and tech is turning into the "go to" sector. This kind of thing always makes me uncomfortable. I tend to like to see a bit of logic at work in the cause and effect of market movements. Here, though, the logic escapes me. Is it just the "tech stocks are cheap" thesis? Given what management is saying about the prospects for their businesses, it seems to me that tech stocks will soon get cheaper.