February 20, 2009
The NASDAQ has been outperforming on a relative basis lately, due to optimism over tech. The last few days has seen a weakening in the NASDAQ but it is still in much better shape than the S&P 500 or the DOW.

Is the optimism justified? Has tech reached a bottom?

Today the SEMI trade group released the January 2009 Book-to-Bill Report for North America-based manufacturers of semiconductor equipment. Rather than list the numbers in detail, I would just like to draw your attention to the charts below (values in millions of dollars, January numbers are preliminary).

This first chart shows that billings in dollar terms are decreasing and, of course, that is bad. What is worse, however, is that bookings are decreasing even faster. Bookings comprise the forward-looking aspect for the industry, similar to new orders, and the indication is that in the near term things will be going from bad to worse. 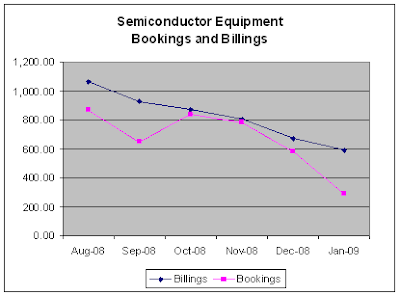 This next chart shows the book-to-bill ratio. The rapid drop-off shows how the decrease in bookings is outpacing the decrease in billings. Whereas billings are 54% below January 2008 levels, bookings are now at their lowest level since 1991. 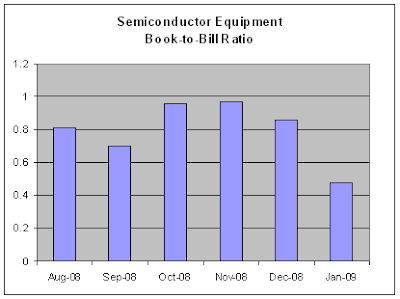 I will just offer the latest anecdote from a chip maker. According to DigiTimes, Taiwan Semiconductor (TSM), one of the largest contract fabs in the world, has announced that they are reducing foundry prices by 10% to 15%. The move is aimed at boosting its utilization rate, which has declined to less than 40%, down from about 50% in the fourth quarter of 2008. In other words, the place is more than half-empty. For the first quarter of 2009, the company has estimated its revenues may fall up to 50% sequentially, with a gross margin of 1-5% and a profit margin of negative 15-19%. Having just started to trade below its 50-day moving average, it would not be a surprise to see this stock drop even further.

All in all, it would seem the recent optimism for chips is premature.