February 09, 2009
We executed the usual weekend Alert HQ process (read about this weeks results) and generated several lists of stocks based on our special screens including: Bollinger Band Breakouts, Trend Leaders and Cash Flow Kings (you can download these lists at the Trend Leaders page).

Again I'd like to share the results of the "Leadership Screen". This is where I combine the results of the Cash Flow Kings and the Trend Leaders to find that set of stocks that is common to both screens. The following chart presents this week's results (prices are as of Friday, Feb 9, 2009).

Very often, we see small-caps and micro-caps on the lists. Their volatility sometimes generates quick moves up that land these stocks on the Trend Leaders list.

Focus on the large-caps and mid-caps this week --

Among the new arrivals on this "super" list we have several large-caps and mid-caps.

The first is Cigna (CI), the insurance company. There was talk today that more insurance companies may get access to TARP funds and Cigna continued its breakout above its upper Bollinger Band. The stock is looking very strong, having more than doubled since hitting its low in November. 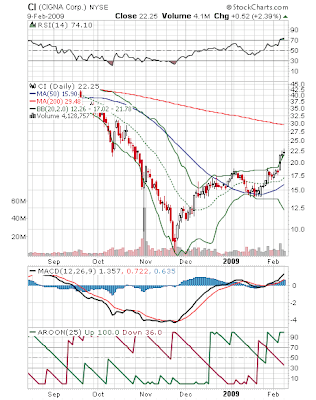 Another is Humana (HUM), the big healthcare company. Here's another company that has just about doubled since the November lows and is now comfortably above its 200-day moving average. 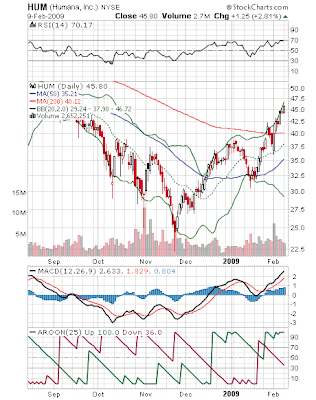 We briefly mentioned Morgan Stanley (MS) in a previous post but it worth noting that the stock has stayed on this list for several weeks now. It is rare to see stocks doubling in this miserable market but to see a financial stock registering consistent, strong performance is quite surprising these days. It appears that investors have no fear that Morgan Stanley will be nationalized. 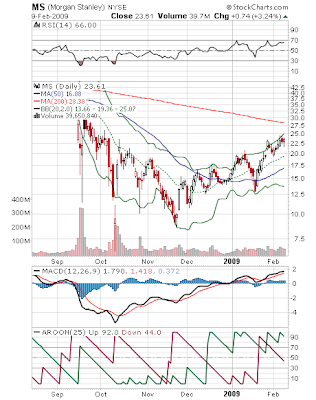 Finally, I thought all the fertilizer companies had tanked and fallen out of favor. This week, however, we see Terra Nitrogen (TNH) on the list. This company makes nitrogen-based fertilizer products and they were up over 5% today. 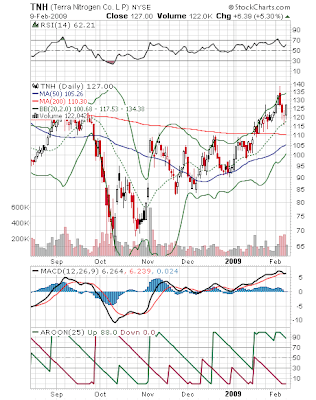 So if you feel small-caps and micro-caps are too much of a crap shoot, these large-caps and mid-caps offer strong price momentum combined with strong cash flow and a proven history. Put 'em on your watch list.

Anonymous said…
Now result season is going on and results are not that positive in broader terms. More or less results are mix for Indian companies. Still Indian stock market requires one triggering point which can give clear trend in the market.

Still Nifty is in mix zone. Nifty will be bullish only if Nifty manages to trade and sustain above 3150-3200 level below these levels bears will rule the dalaal street.
Few Stocks to stay away from for short term
1. DLF
2. Satyam comp
3. Bharti Airtel
4. Tata steel
5. Rcom

Please feel free to contact us for any query.

sharetipsinfo said…
Hi,
It’s a well know fact that stock market is affected by elections and now Election 2009 are about to begin in some time so for sure they will also have some sort of impact on Indian stock market.
One can find complete report on Impact of elections on stock market

Apart from Elections another major concern for Indian stock market is Inflation. There was a time when we were concerned about rising inflation but now we are conscious about this falling inflation.

So big question is what should day traders and investors do?

Frankly speaking day traders are least concerned about the market they simply follow trend and make maximum out of it. But yes investors should keep there portfolio light till the elections get over.

Please feel free to contact us for any query.