February 08, 2009
Hope springs eternal in the hearts of investors and this week hope spread its wings and moved the markets. It didn't hurt that after four down weeks in a row, the market was ready for a bounce. With gains ranging from 3.5% to 7.8%, each of the major averages staged a strong rally this week.

With all eyes on Washington, the news that the Obama stimulus plan was near a vote was all that was needed to raise the hopes of investors that the benefits of the plan would soon turn the economy around. To further elevate everyones hopes there was news that Tim Geithner, the new Treasury secretary, would deliver a speech on Monday, February 9 that would detail the administration's plan to save the banking sector. At last, a plan and the hopes it would resolve credit crisis.

While investors wallowed in hope and bid up stocks giddily, the economy resolutely refused to cooperate with the feel-good mood.

Retail sales were reported by a number of large chain stores and except, of course, for WalMart, the results were uniformly bad. Investors seized on the fact that results were merely bad, not shockingly bad, and shrugged it off as a sign the bottom was in.

Non-farm payrolls provided a negative surprise which was also shrugged off. What did it matter that almost 600,000 people lost their jobs last month and that unemployment was now at 7.6%? Help is on the way from Washington!

Continuing the "less bad is good" theme, we had the ISM manufacturing index and the ISM services index both come in better than expected though still firmly the region indicating contraction. Many seized on the 6.3% uptick in pending home sales as a positive but looking deeper into the numbers it turns out all the gains were in the states with the most foreclosures. The numbers continue to sag in most other places.

All of this gave our indicators a good bounce this week and our TradeRadar statistics now show two weeks of improvement! 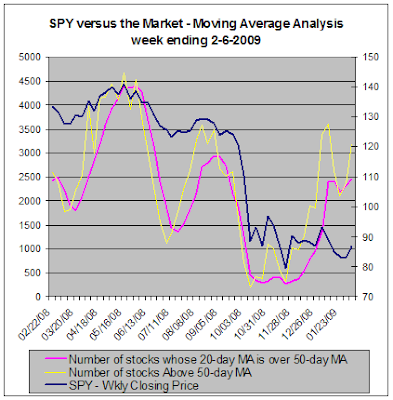 Over the last three weeks, this chart initially showed weakness, then indecision and now a resurgence in bullishness. Dare I say it - it almost looks like a bottom in the making. That is, if stocks can hold their ground. 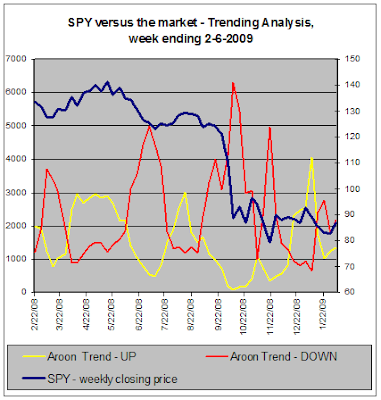 Over the last few weeks this chart has shown a return to moderate weakness but certainly not a complete breakdown. This week's action nudged it in a positive direction but it takes more than a few up days to really move the needle here. It looks like SPY has finally started to break out of the triangle it has been in for the last couple of months and it's breaking out to the upside. Not to throw water on the parade but the breakout is not dramatic; SPY is just barely moving above that downward trend line.

Whereas the move in SPY barely qualifies as a breakout, things look much better over on the NASDAQ. The following chart of the NASDAQ 100 ETF QQQQ shows a clearer breakout over both the longer term blue trend line and the shorter term green trend line. 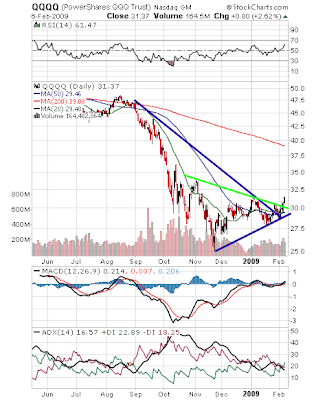 So the confirmation of the NASDAQ allows one to be a little more optimistic about the S&P 500 and perhaps the rest of the market.

So there was a sense this week that the pace of economic deterioration was slowing. Add to this the surge of hope that Washington was finally getting its act together and stocks were off to the races.

Still, it's clear that any plan enacted by Washington will not have an overnight effect. Indeed, it is not a foregone conclusion the plan will even be enacted any time soon. It seems there is a delay of a few days every time a vote is close. As I write this, it seems the much anticipated speech by Geithner has now been postponed in order to allow legislators to focus on the stimulus bill.

It is also clear that the economy is still in a downward trend, even if a few indicators for a single week imply the rate of change has diminished somewhat. So many companies are still announcing layoffs and providing weak forward guidance. Earnings estimates continue to come down.

The week's upcoming economic reports may not have the potential to move the market as much as last week's but there are still a few worth watching. There will be wholesale inventories and business inventories and the Michigan Consumer Sentiment Index. Probably the biggest report will be retail sales as investors look to see whether the consumer has again returned to the mall or not. Then there are the usual weekly initial claims and crude inventories. This is also another busy week for earnings reports.

So this past week's rally was welcome but I can't help but think it was based on a flimsy foundation: economic news that was less awful than feared and a big dollop of hope that Washington will soon fix everything in sight. Investors should remember: hope can be fleeting.