To add some detail, On Wednesday ADP released their December job loss results calculated according to their new methodology and the numbers were way worse than anyone expected, coming in at 693,000. The market fell hard that day and left investors prepared for the worst with respect to the BLS non-farm payrolls report which hit on Friday. In this case, December layoffs were in line at 524,000 while the unemployment hit 7.2%, somewhat above expectations. Markets spent Friday in the red and finished the last hour of the week falling further.

As for company announcements, Alcoa announced major layoffs and a suspension of capital investments, Intel surprised with the second projection of falling revenue within three months and even Wal-Mart reported unexpected weakness in same-store-sales.

Wal-Mart was not alone, as a substantial number of other retailers also reported poor December results and poor expectations for the coming months. To add icing to the cake, GM and Ford also reported sales down over 30%.

On the whole, major averages gave up roughly 4% but are still (just barely) above several important moving averages. 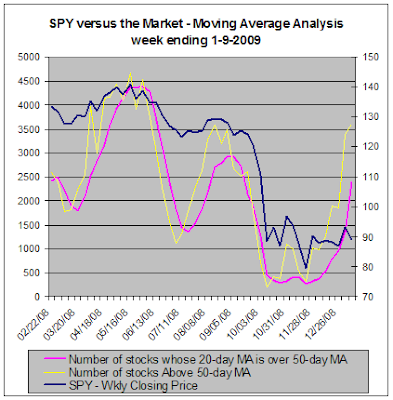 Even though markets fell this week, this chart implies that many stocks have not yet violated their 50-day moving average and indeed the number of stocks whose 20-day MAs is above their 50-day MA even increased a bit. Implication: positive thus far though another week of falling prices could turn this indicator negative 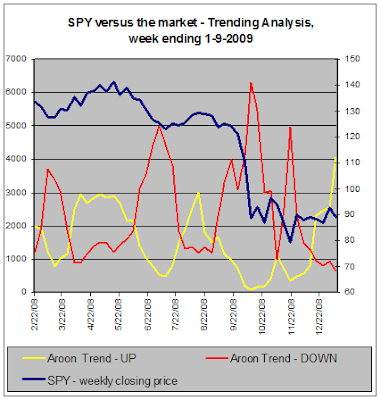 In this case also, though markets weakened the number of stocks exhibiting postive trends has not collapsed. The number of stocks in down-trends fell slightly again. Implication: so far so good. As stated above, though, another bad week and we could see these indicators begin to turn around. One needs to keep in mind that these indicators will tend to lag the actual movement of stock prices and it takes a while for a decline to reverse the trend. 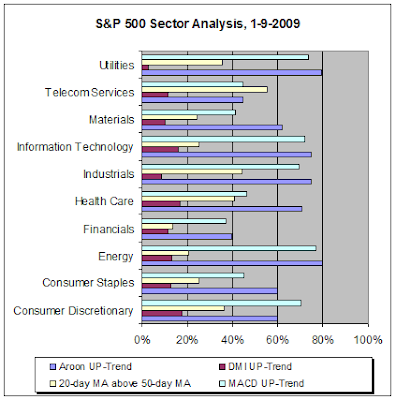 Of notable aspects this week, the chart shows positive action in Energy stocks even as oil prices gave up recent gains this week. Otherwise, the remaining sectors didn't undergo much change over the last week. The take-away for this chart is that there isn't really clear-cut leadership from any particular sector and improvements in the indicators appear to be stalling.

Below is the chart for SPY with a trend line added (the blue line angling upward from left to right). Adding the blue horizontal line to the chart forms a triangle. Since the last time I presented this chart SPY fell below this trend line after failing to move above the upper Bollinger Band and the 50-day moving average and then recovered to move above all these lines. This week, however, the market weakened and SPY has now fallen below the trend line, the horizontal line and the upper Bollinger Band. On the positive side, SPY managed to close above its 50-day MA and more or less right at its 20-day MA. Implication: if we don't get another quick recovery, this is near-term bearish 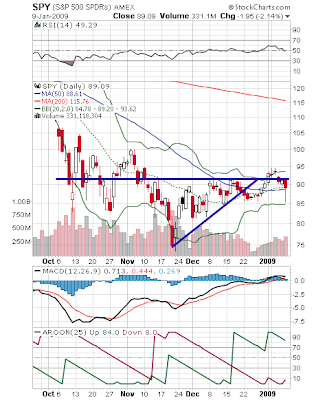 So with major averages up roughly 20% from their November lows a poor week like we just experienced is not enough to set off major alarms in our indicators. Nevertheless, I get the impression that for many investors it is sinking in now that there is more negative news in store and that the eventual recovery is further out than hoped. There is a good chance this could provide further pressure on stock prices.

To add to the negative tone, it appears that the stimulus plan will be running into resistance from Republicans who have suddenly after eight years gotten frugal about spending taxpayer money. Then there is the concept of making tax cuts a big part of the package which many economists feel won't do anything to create jobs in the near term.

In the meantime while we wait for the stimulus package, we can chew on the following expansive list of economic reports this week: chain store sales, retail sales, the Fed Beige Book, weekly initial jobless claims, the Producer Price Index, the Empire State and Philly Fed manufacturing surveys, the Consumer Price Index, industrial production and consumer sentiment. There are a number of market-moving reports among this group and it could be volatile week in the markets as a result.

In summary, sentiment seems less positive and stocks are showing weakness. Layoffs are reaching a level that makes it difficult to maintain optimism and also makes appear that the economy will worsen before it gets better. Stocks may be cheap but it seems there is no hurry to jump in on the long side.