January 06, 2009
The preliminary numbers for November 2008 manufacturing were released today. Headline numbers on factory orders were terrible - twice as bad expected: down four consecutive quarters and falling by 4.6% month-over-month.

We previously wrote on the advance number for November and focused on the tech sector (to read it, click this link to that post).

As our proxy for tech, we'll again look specifically at the Computers and Electronic Products category. This segment includes computers and related products, communications equipment and semiconductors.

The following chart shows the situation with Shipments: 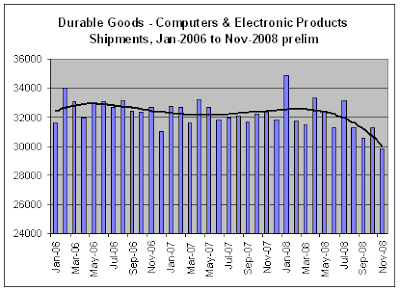 At a summary level, Shipments were down 4.5% month-over-month from October to November but down only 1% year-over-year.

Some of the most hard-hit sub-categories were as follows:
Defense, communication and medical equipment managed to increase Shipments modestly which helped keep the summary number from being even worse. 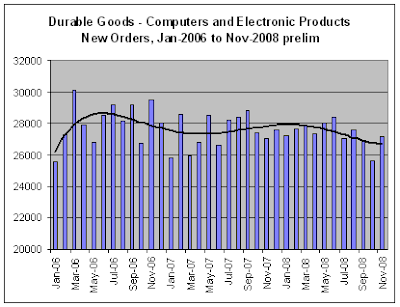 At a summary level, New Orders were actually up 6% month-over-month from October to November and down only 0.5% year-over-year.

Looking at some of the sub-categories there is more good news than bad:
In the previous post we presented the equation used to calculate New Orders: 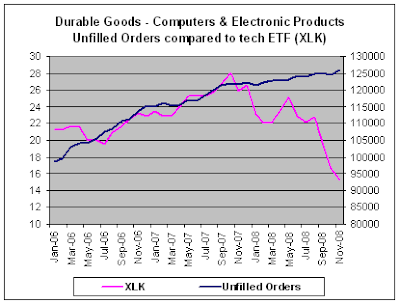 It can be seen that Unfilled Orders have been moving steadily upward while tech stock performance as exhibited by XLK has moved rapidly downward.

The government also provides data on the ratio of Unfilled Orders to Shipments. We have presented this data compared to XLK. 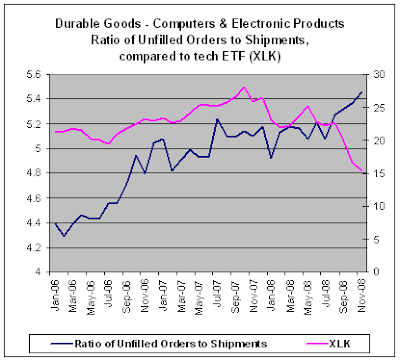 During the last few months this ratio has been accelerating upward as the numerator, Unfilled Orders, has increased gently and the denominator, Shipments, has decreased sharply.

The headline number had New Orders down 4.6% but we find the Computers and Electronic Products category is boasting a 6% increase in New Orders. Is technology bucking the trend here?

I mentioned in the last post that in the normal course of business some orders are inevitably canceled and thus do not directly convert to future shipments.

What I think these charts demonstrate is that orders are indeed being canceled. Each month New Orders and Unfilled Orders, as measured here by the manufacturing survey administered by the U.S. Census Bureau, are slowing but not nearly as rapidly as shipments have slowed. In other words, these orders do not seem to be turning into shipments. And tech stocks have plunged as a result.

In conclusion, it is good that orders are up but that is not enough to signal the "all clear" for the tech sector. Until we can see a trend of increasing shipments or at least a chart where shipments are no longer dropping, it is best for tech investors to stay on the sidelines.