Google AdSense revenue flat - what does it mean?

From the earnings release, Google had this to say:

Only 1% over the previous quarter? That seems pretty light for Google. But look at the chart below (courtesy of HowToNotMakeMoneyOnline.com). AdSense revenue has not been growing significantly since the end of 2007. Yet it is also clear that AdSense makes up a big chunk of Google revenue: 30% as of the most recent quarter. 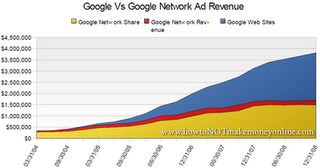 So what has caused AdSense revenue to stagnate?

Certainly there is no lack of opportunity. With the continued proliferation of blogs and web sites that are willing to host AdSense ads, the inventory of ad slots keeps increasing. Furthermore, Google has mentioned in its most recent conference call that as some advertisers reduce their ad buys in the current tough economy, those ad slots on affected web sites are willing to accept AdSense ads.

Google has referenced their effort to clean up "MFA" sites. These are Made for AdSense sites that have very little real content and feature AdSense ads disguised as menus and content to fool unsuspecting users into clicking them. These sites are combined with an AdWords campaign to drive traffic to these MFA sites (sometimes referred to as AdWords/AdSense "arbitrage"). Google feels that they "pollute" search results and has made a serious effort to ban them. During the conference call, the company indicated they had made so much progress that it may have had a noticeable impact on AdSense revenue. Still, it is unlikely this has caused a year's worth of stagnation in AdSense revenue

So if there are plenty of ad slots then either there are less clicks or each click is worth less. But here is what Google just said in the earnings release:

So it seems like the number of clicks is not the problem. That leads us to how much money Google is making per click. This is composed of two parts: there is what Google gets from the advertiser and what Google pays to the publisher or owner of the web site hosting the ads. The payout to the publishers is known as Traffic Acquisition Cost or TAC. Google keeps the difference. This amount has also stayed the same for the last year. You can see it as the red area in the chart above.

That implies that what advertisers have been willing to pay for keyword-based advertising like AdSense has been stagnant or declining. This is in contrast to the keyword inflation that has been seen in AdWords, at least before the economic downturn got into full swing. The reason may be due to the maturity of the AdSense product.

Many of the biggest, most popular sites don't run AdSense. They work with ad networks and run text ads, display ads and affiliate-style ads. Some bloggers advise that getting rid of AdSense is necessary to convince visitors the site is run by professionals.

There is a movement toward cost-per-action (CPA) advertising where publishers are paid not merely for clicks but for buyers actually taking an action on the advertiser's site - buying a product, signing up for a demo or a newsletter, etc.

"Smart pricing" is a Google process that has been discussed in SEO circles. This is an attempt by Google to acknowledge differences in traffic quality and to begin to accommodate the CPA concept.

Google describes smart pricing this way: "Google's smart pricing feature automatically adjusts the cost of a keyword-targeted content click based on its effectiveness compared to a search click. So if our data shows that a click from a content page is less likely to turn into actionable business results -- such as online sales, registrations, phone calls, or newsletter signups -- we reduce the price you pay for that click."

So it appears that Google's own systems may be helping reduce AdSense revenue. The contention that AdSense doesn't provide the best traffic for advertisers may indeed be true. Acquiring more ad slots on higher quality web sites may help but when the economy improves, will those sites keep AdSense or go back to accepting more lucrative ads from higher quality, higher paying advertisers? AdSense may only see a temporary bump and then go back to its current flat level of revenues. Luckily, that is still a pretty good chunk of change. In terms of growth, though, it's a good thing search ad revenues are still increasing strongly for Google.

Anonymous said…
The site you got the AdSense Revenue Chart from is http://www.howTONOTmakemoney.com

July 21, 2007
This is the first in an ongoing series of articles where I discuss what I feel are keys to successful investing. It is based on a post that provides a summary of the ten keys that individual investors should use to identify profitable stock trades. (Click here to read the original post)

There are two basic steps to investing. First, you need to find stocks that seem to have some potential. Then you have to determine whether these stocks are actually good investments. There are many stocks that at first glance look interesting, but further research reveals that there are too many negatives to warrant taking a position.

This first post in the series starts at the beginning: getting good investment ideas.

Key #1: If something special is happening to a stock, it will be reflected in some kind of unusual activity in the markets.

As individual investors, we will never be the first to know; however, unusual activity can be an early sign that allows us to follow the Wall Street professionals and …
29 comments
Read more

August 22, 2007
This is the fourth article in a series of posts describing 10 tools to help you identify and evaluate good investing ideas. It is based on a post that provides a summary of the ten keys that individual investors should use to identify profitable stock trades. (Click here to read the original post)

Information on new trends might turn up anywhere. In conversation with friends or business associates, in newspapers or magazines, on TV or though your work. The key is to be aware of trends and how they start, stop or change. We'll start by describing what to lo…
18 comments
Read more