January 29, 2009
The advanced numbers for December 2008 Durable Goods were released today and they were considerably worse than expected. The headline numbers were as follows:
As we always do, we will focus on the tech sector, looking at the summary category of Computers and Electronic Products and updating our charts with the December data.

The following chart shows how Shipments have been trending ever lower. Note that despite shipments of consumer electronics increasing for the holiday selling season, it wasn't nearly enough to affect the rapidly declining trend. 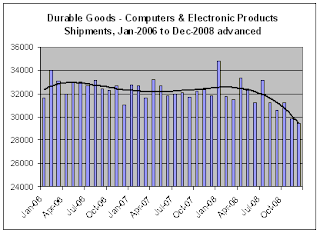 This next chart looks at New Orders. Another plunging trendline. 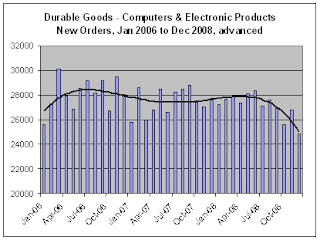 New Orders fell over 7% from November to December which seemed like rather brutal drop. This prompted me to recast the chart above into one that tracks the percent change from month to month. 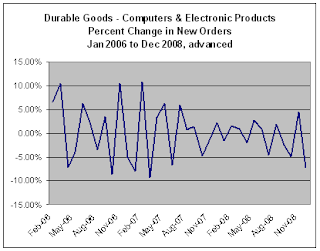 It is easier to see now that December's move was one of the biggest in percentage terms since the middle of 2007. Unfortunately, that move was down and serves to more than negate the positive move seen in the previous month.

The next chart shows total inventories. The increase in inventories has been inexorable and has reached the highest level in three years. 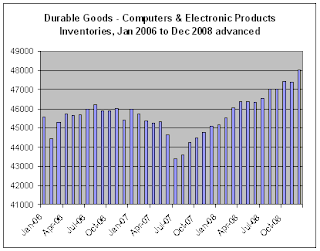 Tech is still in a tough situation. Summarizing what we have seen in the charts we have the following points:
These charts show that the downturn in tech hasn't showed any evidence of a bottom yet. Shipments and New Orders continue to decline in tandem.

The rise in inventories is another troubling sign. By the time demand begins to return, there will be high levels of inventories to be worked through before the tech industry can begin to really ramp up production. In the meantime, the industry will continue to run at low capacity, depressing margins.

The conclusion is that a recovery in tech is unlikely in the near term. Given the continued drumbeat of layoff announcements, it appears that tech industry management feels the same way.