January 13, 2009
Last week markets received some pretty ugly news related to employment, or the lack thereof. ADP came out with their estimate of nearly 700,000 jobs lost in December. The Bureaus of Labor Statistics released their non-farm payrolls report which included job losses of 524,000 and an unemployment rate hitting 7.2%.

Big numbers but what do they mean? And how do they compare to unemployment in previous downturns? I'd like to share with readers the following two charts from Citi's "Comments on Credit" that provide some interesting comparisons.

Citi has looked at job losses over time starting at the cyclical peak of the stock market prior to each recession. They have plotted this data for the current recession and compared it to the same data for several earlier recessions. The have further differentiated between "mild" recessions and "deep" recessions.

This first chart shows job losses. Our current recession is the blue line. Note that it is showing more job losses than the previous "deep" recessions. On the other hand, it seems right on schedule in terms of hitting an extreme level about 13 months after the peak. 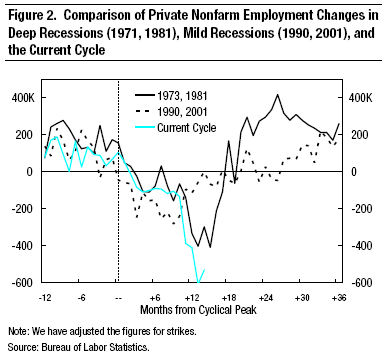 An optimist might look at this chart and determine that we should be on schedule to see job gains soon, much as we experienced in previous "deep" recessions. Unfortunately, most observers are expecting job losses to continue through the rest of this year, causing the blue line to drive deeper to the downside. Employment is only anticipated to begin to recover much later in 2009 or in 2010.

This next chart shows how the unemployment rate changed from its starting level at the peak of the stock market over the course recession. Again, our current recession is the blue line. 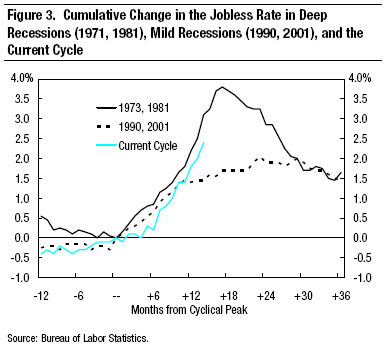 In comparison to the line designating a "deep" recession, we see that unemployment had already starting slowly increasing a full year prior to our most recent stock market peak and has been accelerating for the last six months. Extrapolating from what we see in this chart, if our current recession is only as bad as previous "deep" recessions, we could expect to see unemployment top out just shy of 9%. That is in the ballpark of what many observers are predicting: peak unemployment of 9% to 10% during this cycle.

It is unlikely that a new bull market can start until investors see that the unemployment rate is stabilizing and beginning to decline and that monthly job losses are moderating. If this current recession can be considered to be similar to past "deep" recessions, we may only have a few more months of extreme pain. The big "if" is whether this recession will be worse than other "deep" recessions.

Unfortunately, the consensus seems to be that this recession, by most measures, will be deeper than the previous "deep" recessions. The global nature of the downturn, the collapse in housing and manufacturing, the devastation in the financial sector and, as described here, the growing problem with unemployment, all point to a recession that promises to be worse than what Citi considered as "deep" in their analysis.

So the big "if" is looking more like the big "long shot" at this point. Better keep your fingers crossed.