Weekly Review - indecision or a bottom?

December 07, 2008
Is it a bottom when horrific news results in a rally?

Friday, the non-farm payrolls report was released and it indicated 533,000 jobs were lost in November, the worst monthly decline since 1974. After initially moving lower the markets turned around and rallied, trimming the week's losses to a range of 2% to 3% for the major averages. Some analysts indicated the rally was based on "good" news from Hartford Financial, that the company wouldn't have to raise new capital and that earnings would "only" be down about 50%. Sounds great to me...

Other news during the week was equally lack luster. The ISM Index, a survey of national manufacturing conditions, registered a drop to 36.2, well under the 50 that would indicate contraction in the manufacturing sector. The NBER officially declared that we have been in a recession since December 2007 (no surprise there). Ben Bernanke remarked the Fed may use some unconventional methods such as buying Treasuries in the open market. This further stoked the bond market which made new highs all week but also showed investors that the economy is far from out of the woods and the Fed may be running out of ammunition. Auto sales were worse than expected and expectations had already been extremely low. The Fed's Beige Book confirmed that the economy stinks. Retail sales were the worst in nearly a decade. Continuing claims for jobless benefits reached a 26-year high. The percentage of loans in the foreclosure process (2.97%) hit a new record in the third quarter.

Whew! What a litany of doom and gloom. Yet stocks rallied on Friday. This is why I don't try to predict the direction of stocks...

Each week our Alert HQ process scans over 6500 stocks and ETFs and records their technical characteristics. Primarily we look for BUY and SELL signals for our free stock alerts; however, we also summarize the data in order to gain insights in the week's market action. The following charts are based on daily data and present the state of some of our technical indicators. 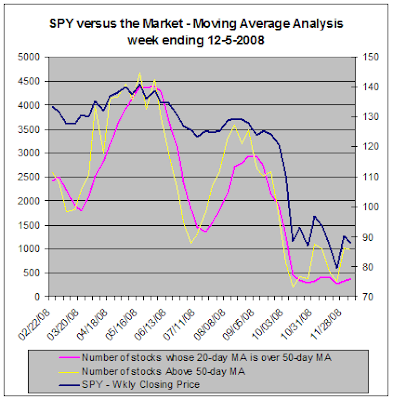 In terms of closing prices, the chart above shows the S&P 500 making what looks like another lower high. In terms of how many stocks are above their various moving averages, the data continues to bounce around the lows. Last week I asked: Is this what a bottom looks like? It could be but it is clearly a market that can't go down and won't go up. Implication: implies many stocks keep running into resistance at their moving averages

This next chart is based on Aroon Analysis and compares our trending statistics to the performance of SPY. We use Aroon to measure whether stocks are in strong up-trends or down-trends. The number of stocks in down-trends (the red line) fell again this week to under 1500. The number of stocks in up-trends (the yellow line) another modest increase from a very low number of 472 up to a still low 559, only 8.6% of stocks we examined. Implication: implies most stocks are moving sideways rather than exhibiting strong trends one way or the other 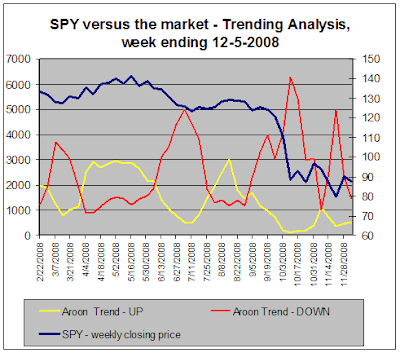 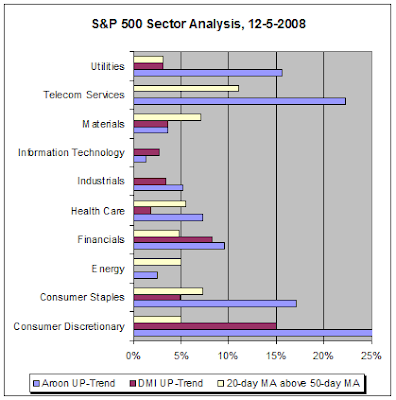 As the chart above shows, things are getting a little better in some of the sectors. Note that the chart's maximum is again at only 25% this week so what we are seeing isn't all that impressive; nevertheless, as we pointed out last week, things are looking noticeably better than they were recently. In particular, Financials are perking up a bit. Consumer Staples and Utilities continue to hold up better than many other sectors and the chart reflects that. It is totally mystifying to me that the Consumer Discretionary sector is performing so well in the face of big job losses and and a documented plunge in consumer spending. Nevertheless, there it is.

Our stock market statistics based on daily data seem to be reflecting indecision and it is no wonder. Once again we had a week with economic reports that continued consistently negative. Once again stocks had a big one-day decline, the kind that only happens during bear markets. Jobs (or the lack of them), industrial numbers and consumer spending numbers continued to portray an economy in disarray yet stocks rallied on Friday.

Stocks are caught in a tug of war between Bears who point to economic news that continues to get worse rather showing any kind of bottom, and Bulls who feel that stock prices already reflect all the bad news (which some are saying can't get any worse) and that government actions will inevitably lead to a firming in the economy.

It seems sentiment is leaning toward the positive side. That, combined with a potential bailout for automakers, the announcement of the outlines of a huge stimulus package by president-elect Obama and the efforts of governments around the world to reduce interest rates and spend billions to prop up local economies support the case for a very cautious bullishness in the short term.

To provide more insight into where our economy is going, this week we will see the following economic reports: pending home sales, wholesale inventories, export prices, import prices, initial jobless claims, Trade Balance, Producer Price Index, retail sales, business inventories and the University of Michigan Consumer Sentiment Index. Many of these are not typically market moving so the ones to watch will be initial jobless claims, retail sales and possibly the U of M Consumer Sentiment.

From a technical analysis perspective, the bulls seem to have a slight edge. Major averages are just peeking over their 20-day moving averages and are hanging on a bit above recent resistance.

With only a modest amount of data being released this week, will bulls be able to maintain the positive sentiment and positive momentum that appeared last Friday afternoon? Or will doubts begin to gnaw at investors and cause stocks to resume their downward trend? Data thus far argues that we may be stuck in a range. What do you think?