IDC forecasts slower PC growth - how bad will it be?

December 03, 2008
IDC, a provider of market intelligence for the information technology, telecommunications, and consumer technology markets, released their forecast for PC shipments.

With the economic downturn impacting all kinds of products, IDC expects demand for PCs to slow significantly. The report forecasts continued growth, just growth not as strong as previously expected.

We took the IDC data and plotted it in the chart below. 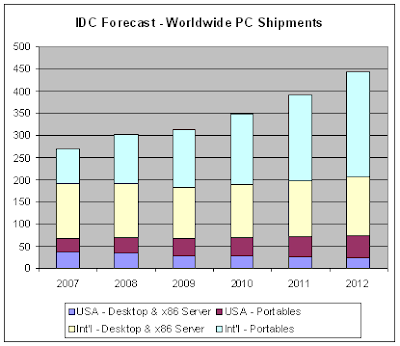 The three take aways from this chart are as follows:
The bottom line is that PC growth may slow in certain segments but worldwide total sales will slowly continue on their upward trajectory and begin to accelerate after 2009. Considering the current state of the economy, that's pretty good news for PC, disk drive and semiconductor manufacturers.

On the other hand, with things the way they are these days, can any forecast be relied upon?

Source: IDC - PC Market Will Slow As Financial Turmoil Spreads, According to IDC

trading, would you mind to exchange link with me?

My blog is about options/stock trading and I will post

articles and my trading journal.