December 14, 2008
OK, this is getting monotonous. Another week of reports indicating the economy is spiraling downward yet stocks manage to gain.

We had a major bankruptcy (Tribune Company), another bank failure, earnings warnings from a number of bellwether stocks (3M, FedEx, Texas Instruments, Kroger, Nucor, and Electronic Arts), announcements of major layoffs (Bank of America, Dow Chemical, Rio Tinto), initial jobless claims and continuing claims continuing their climb upward and a decline in retail sales that was awful but was not quite as bad as feared.

Then there were the bizarre developments on the far side of the law. The Illinois governor caught on tape trying to sell the Senate seat vacated by Barack Obama. Bernard Madoff, former chairman of the NASDAQ, arrested for admitting his investment operation was basically a Ponzi scheme and that $50 billion had been lost.

Finally, we had the Senate rejecting the bailout of the auto companies and George W Bush and the Treasury department rushing to reverse their previous opinions and commit to providing some kind of backstop.

So this was a week that showed no lack of excitement, gloom and surprise. All the ingredients for a rally, right? It sure looks like it. Stocks did slow their ascent but major averages (except the Dow) still managed to tack on another per cent or two.

Each week our Alert HQ process scans over 6500 stocks and ETFs and records their technical characteristics. Primarily we look for BUY and SELL signals for our free stock alerts; however, we also summarize the data in order to gain insights in the week's market action. The following charts are based on daily data and present the state of some of our technical indicators. 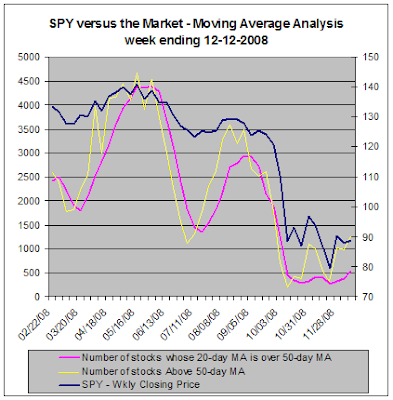 This week we see some definite improvement. I would like to declare the bottom's in and it's rally time but some weeks ago the little improvement we saw turned to naught. So for now we will say that things are looking positive now that the number of stocks whose 20-day MA is above their 50-day MA has finally moved above 500. This is a definite improvement but we must keep in mind that it is less than 8% of all stocks we examined, not exactly a huge number. It is encouraging to see that the number of stocks above their 50-day MA has also moved to a new multi-month high. Implication: stocks are beginning to show strength and they may have the momentum to continue on the upward path.

This next chart is based on Aroon Analysis and compares our trending statistics to the performance of SPY. We use Aroon to measure whether stocks are in strong up-trends or down-trends. The number of stocks in down-trends (the red line) fell slightly this week to under 1300. The number of stocks in up-trends (the yellow line) saw another modest increase to just over 800 after having bottomed at 346 a month ago. So far, only 12% of stocks we examined can be considered to be in strong up-trends. Implication: no major change from last week as this data implies most stocks are moving sideways rather than exhibiting strong trends one way or the other. 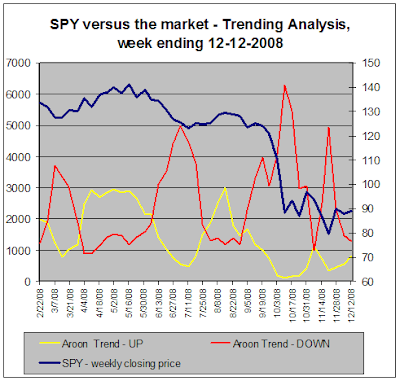 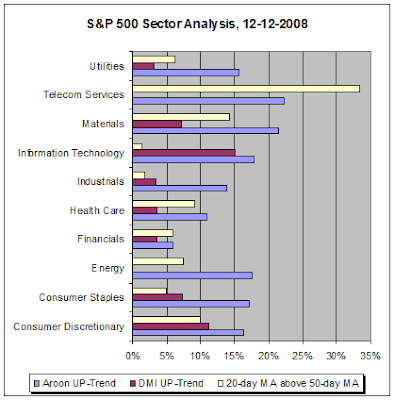 Compared to last week, I have expanded the scale on this chart to a maximum of 35% from 25%. This is a good sign. It means that the number of stocks exhibiting bullish characteristics is growing. First, let's get Telecom out of the way. There are only 9 stocks in that sector in the S&P 500 so it only takes a few to start moving up in order to see that sector's indicators jump. So we won't assign too much significance to Telecom at this time. Information Technology, however, has definitely begun to exhibit better health. Consumer Discretionary has backed off a bit and Financials have weakened. In general, though, all sectors are doing noticeably better but there is perhaps a little more reality underpinning the improved behavior. To me is seems that Consumer Discretionary and Financials are the two sectors whose rallies were built on the most dubious foundations so it it seems right that they are beginning to come down to earth while the other sectors begin to see some interest.

Our stock market statistics based on daily data are definitely reflecting a firming in the market. Nevertheless, I am still struggling to believe the continued waves of bad economic news can be shrugged off with a "it can't get any worse" comment. The suggestion that we can have a V-shaped recovery when the unemployment rate is this bad and companies are constantly laying off workers and forecasting weaker earnings strikes me as wishful thinking.

The continued flight to quality that is pushing Treasury bond prices up and yields down shows that all investors are not so bullish on stocks as it would appear at first glance. It is clear that bond investors are not taking the economic situation lightly.

This coming week, we have a full slate of economic reports and we have another opportunity to see whether the sheer weight of dismal news can finally cast a negative shadow on stocks. We will see the New York Empire State Index, capacity utilization, industrial production, building permits and housing starts, CPI, initial jobless claims, leading indicators and the Philadelphia Fed Index of manufacturing activity.

So with the technicals looking better though not great, and the expectation that the week's economic reports may again be preponderantly negative, it is hard to assume stocks are beginning a new bull market. Certainly there is a new upward trend in place but I suspect it will eventually be recognized as a bear market rally. In the meantime, let's see if the major indexes can move above their 50-day moving averages. Let's take it one step at a time...