December 26, 2008
The Durable Goods report was published just before Christmas. It presents the advanced numbers for the month of November 2008.

The headline numbers were bad but not as bad as feared:

Focus on the technology sector --

As always, we'll focus on tech and look for any signs of improvement.

As our proxy for tech, we'll look specifically at the Computers and Electronic Products category. This segment includes computers and related products, communications equipment and semiconductors. First, we'll look in the rear view mirror and see what happened with Shipments. 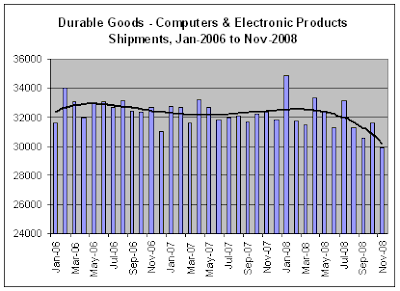 The next chart presents New Orders data. If you are wondering how they calculate New Orders, the formula is as follows: 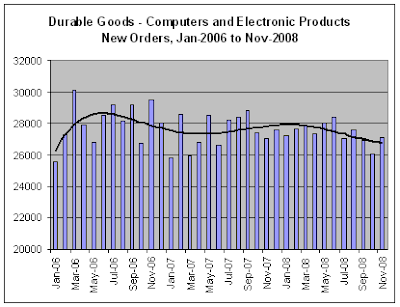 The big drop-off in shipments may have created an opportunity where a bit of decent demand could yield an increase in new orders.

On the other hand, inventories are higher year-over-year, so some new orders will not result in increased production though they may translate to more shipments.

A pessimist would also point out that in the normal course of business some new orders are inevitably canceled and thus do not directly convert to future shipments. During uncertain economic times, however, it would not be surprising to see an even higher percentage of new orders canceled, further depressing the level of future shipments.

So tech is facing grim and uncertain times but this month provided a glimmer of hope. October's numbers for both shipments and new orders were revised slightly upward and that was good news. Though shipments continue at depressed levels, November's new orders are better than might have been expected given the economic backdrop. Still, one month is not a trend nor does it confirm a bottom. All we can do is watch and wait for a stronger indication that tech is in recovery mode. That indication is not here yet.