December 27, 2008
It almost felt like old times with the Fed rescuing another sinking institution this week. This time the Fed made an emergency decision that GMAC can be categorized as a bank holding company and is thus eligible for TARP funds.

Also familiar was another week's worth of negative economic news. Initial jobless claims hit a 26 year high at 586,000. The housing market proved it is still able to surprise with worse than expected news as existing home sales plunged 8.6% from October and new home sales fell to their lowest level on an annualized basis in 17 years. Consumer spending in the holiday period was reported to be down 4% according to MasterCard. Final Q3 GDP numbers were reported and they confirmed a decline of 0.5% including personal consumption expenditures (PCE) down 3.8%.

As we have been seeing for several weeks now, the bad economic news may have kept the market from advancing but it didn't cause the market to plunge either. When the dust settled on the week we saw all the major averages down modestly.

From a technical point of view, it was a definite positive that the markets have not sunk to test previous lows in the face of more or less continuous bad economic reports. It is a negative that the major averages, with the exception of the Russell 2000, have all fallen back from their 50-day moving averages and finished the week slightly below their 20-day moving averages.
Given the low volume registered during this holiday-shortened week, bulls will look on the bright side and discount this drop in the market.

Each week our Alert HQ process scans over 6400 stocks and ETFs and records their technical characteristics. Primarily we look for BUY and SELL signals for our free stock alerts; however, we also summarize the data in order to gain insights in the week's market action. The following charts are based on daily data and present the state of some of our technical indicators. 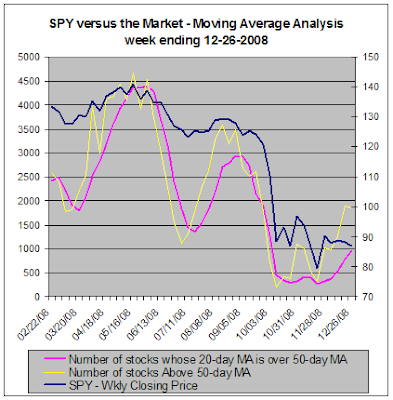 Though SPY appears to be drooping, there are apparently some stocks that are firming. The number of stocks over their 50-day MA only dropped slightly while the number of stocks whose 20-day MA is above their 50-day MA actually increased. This could be the result of small-caps and mid-caps showing strength as they often do in early stages of recoveries from bear markets. Implication: cautious optimism.

This next chart is based on Aroon Analysis and compares our trending statistics to the performance of SPY. We use Aroon to measure whether stocks are in strong up-trends or down-trends. The number of stocks in down-trends (the red line) declined slightly this week to under 900. Considering this number was over 6000 in October, this is a tremendous improvement. The number of stocks in up-trends (the yellow line) saw a slight increase to almost 2500 after having bottomed in early October. So far, roughly 30% of stocks we examined can be considered to be in strong up-trends. This week was a holiday shortened week with low volume so outcomes should be taken with a grain of salt. Nevertheless, there is a definite slowing down in the number of stocks that were able to establish strong up-trends. Implication: cautious optimism as these indicators are at least still moving in the right direction. 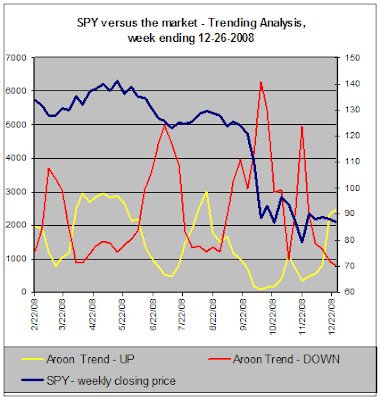 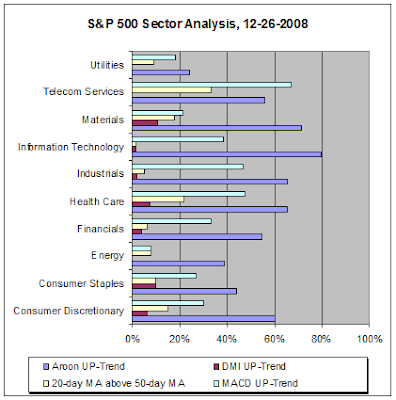 The Aroon analysis is showing that most sectors have a good percentage of stocks exhibiting recent up-trends. DMI, however, is showing most sectors remain weak. Weakness is confirmed by the small percentage of stocks in each sector whose 20-day MA is above their 50-day MA. I have added MACD analysis this week but the results fall in the middle. Implication: technical indicators do not agree, either within sectors or across all sectors so the interpretation is that there is no clear trend at this time.

Below is the chart for SPY with a trend line added (the blue line angling upward from left to right). Note that SPY has broken below this trend line after failing to move above the upper Bollinger Band and the 50-day moving average. Adding the blue horizontal line to the chart forms a triangle. SPY has now fallen out of the triangle to the downside. Implication: if we don't get a quick recovery, this is bearish 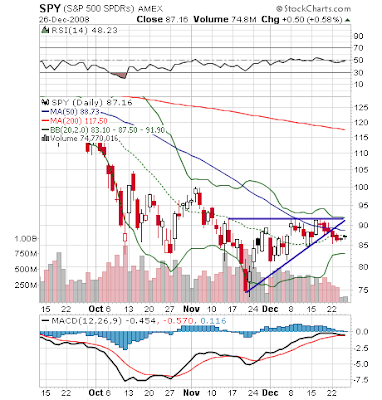 The urge to call a bottom has been strong and many analysts have made the argument that stocks are cheap enough to begin building positions whether the bottom is in or not. This makes some sense because it is not dependent on determining the exact bottom.

Based on all the technical indicators discussed above, the trend is unclear. What seemed like an up-trend in the major averages has dissipated while small stocks have held on for modest gains.

What is not unclear is that the economy continues to show weakness. This week we saw some reports that indicated the damage was getting worse, not better. Until the economic reports begin to show a decrease in the magnitude of the problems in retail, manufacturing, housing and unemployment, I suspect the market will continue to struggle.

Looking ahead, we have another holiday shortened week coming up and there will only be a few reports for investors to absorb: Chicago PMI, consumer confidence, initial jobless claims and the ISM index.

According to one article I read, we are now in the official Santa Claus rally period. With volume low, the trend uncertain and the economy in the doldrums it would be a surprise indeed if Santa were to provide a present for investors. I suppose we will need to begin looking forward to the January effect as the next event to provide hope for the markets.