December 15, 2008
Today, the Fed released the Industrial Production report for November. The market generally considered the headline number, which registered a decline of 06%, to be not as bad feared.

The first chart below the presents data from February through October. This report was released in November. Starting in spring of 2008, growth virtually came to a halt. Production just managed to hit a minor peak in June and then started to fall off slowly. Clearly not a good thing but not exactly a disaster for the industry. 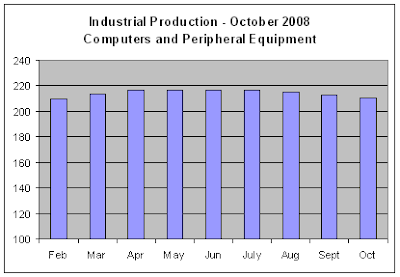 This next chart presents the data from February through November and was released today. This time we display revised data for the June through September months. It can be seen that June wasn't a peak after all. Indeed, production for this sub-sector dropped off rapidly after May with the revised data 1% to 2% worse than the numbers that were initially released. If there is anything hopeful in the chart below, it is that the decline in production seems to be slowing down a little. 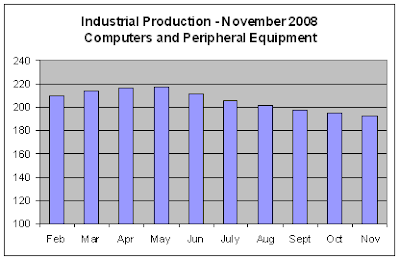 The next two charts look at Semiconductors. In this first one, the data from February to October is presented. This was reported in November. Production hit a clear peak in July and began sliding. 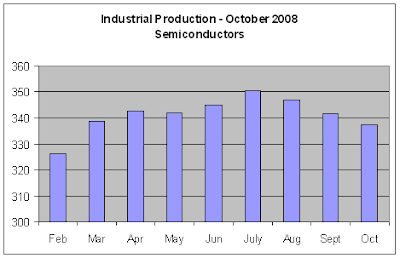 This next chart, based on today's report, displays the data from February to November and presents revised data for the June through September months. Production was revised down approximately 1% from the month earlier report which can be seen in the steeper fall-off in the data. 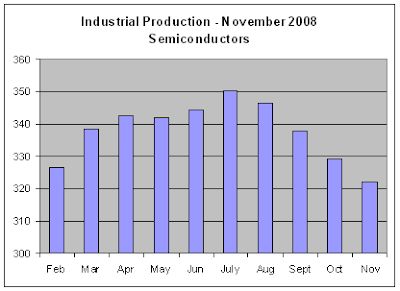 It is no wonder many tech companies are lowering guidance and announcing layoffs. With production dropping like this it is understandable that management has begun to hunker down. The size of the downward revisions is especially surprising and alarming.

The question is whether this is as bad as it gets. Though the rate of decline in both sub-categories slowed in November according to today's preliminary numbers, there is no assurance yet that Industrial Production in the tech sector has hit bottom. We may look at next month's report and see November's numbers revised downward, too.