March 05, 2008
Last night I wrote a post about Merrill Lynch's concept of a weakening or reduction in leadership being a result of a slowdown in profit growth.

This morning it occurred to me that yesterday's rally into the close showed the principle at work. The image below from the Wall Street Journal Online shows the advancers and decliners in yesterday's trade. 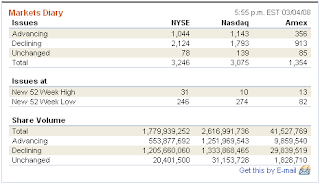 Yesterday the major averages were down well over 1% for most of the day. At the last minute, there was a rally based on more rumors of a recapitalization for Ambac, Cisco's CEO saying long term growth is on track (which he also said when Cisco earnings were released) and Apple saying they are sticking to their guidance on iPhone sales.

Should we take heart from this rally or regard it with skepticism? On the NYSE, which finished with a small loss, losers outpaced gainers two to one. On the NASDAQ, which actually managed to eke out a gain, only 39% of stocks managed to end the day in positive territory, let alone exceed the gain in the NASDAQ Composite index. On the AMEX, losers exceeded gainers by three to one.

You may also notice that new lows swamped new highs on all three exchanges.

It is clear that leadership is narrow indeed, even on a day when there is a rally attempt. As I said in yesterday's post: investors beware.

One of the other things that played out yesterday was the recovery of the S&P 500 from a drop below significant support. Back in May of 2006, the S&P 500 made an intermediate high at 1325. That level now comes into play as a support level. We have bounced off that level several times already.

Yesterday, the index spent most of its time below that level but just managed to climb above it to close at 1326.75.

The NASDAQ Composite is in the worst shape. Its high in May 2006 was 2375. Even with yesterday's rally, the index is well below that level at 2260.28. To make matters worse, the index has twice failed to break above that level which is now acting as resistance.

All these signs indicate the primary trend is still down. If the S&P 500 breaks decisively below its support at 1325, I suspect we will see a big move down. Hopefully, that will be the climactic move that will signal a market bottom.