March 27, 2008
Goldman Sachs just came out with a call indicating they have turned cautious on the communications equipment sector.

With this sector comprising one of the buckets of data available in the U.S. Census Durable Goods report (M3 Survey), I thought I'd take a look at the government data that came out yesterday and see if it was consistent with Goldman's view.

In particular, I looked at New Orders and Shipments for the communications equipment category including both defense and non-defense manufacturing.

In general, though, the numbers don't look too bad.

For example, in the last sixteen years, New Order growth in the January to February time frame has been higher only seven times. Over the last five years, the current level of growth in New Orders is right in the middle of the pack.

The chart below plots the New Orders and Shipments numbers from January 2006 through February 2008. 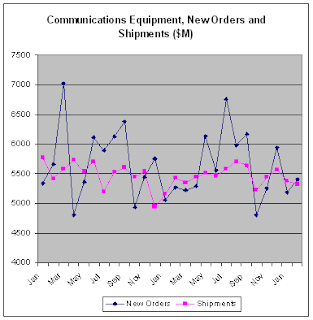 What pops out is the fact that New Orders look to have way more variability than the Shipments numbers. I have in the past assumed that New Orders would make a good predictor of future Shipments. It sure doesn't look like it.

How the numbers are generated --

At this point, I'd like to digress a bit and point out some facts on how the Durable Goods report numbers are generated:

1. The figures published are calculated by applying monthly ratios of change from the Census Bureau's reporting panel (which accounts for about 60% of the U.S total value of shipments) to the Universe levels estimated by the Annual Survey of Manufactures. This is clear as mud but serves to inform the reader that the government is applying some kind adjustment to numbers obtained by surveying a subset of manufacturers and then extrapolates the results to create the report.

2. New Orders (NO) are derived based on the value of current shipments (VS) plus current unfilled orders (UO) minus prior month unfilled orders. The formula for calculating new orders is:

According to this equation, it appears that the volatility in New Orders that we see on the chart is actually the result of volatility in Unfilled Orders. Unfilled orders will turn into shipments only as long as they are not canceled. New Orders may be filled out of inventory so they may not contribute to future demand; hence, Unfilled Orders are used as the better indicator.

What do the numbers tell us?

What is disconcerting is the fact that the general trend for both New Orders and Shipments seems to be slightly but clearly downward.

In looking at the values of New Orders, there has been a very visible slowdown starting in August of last year. Shipments began to decline one month later.

To deal with the volatility, I thought it might be useful to try some moving averages. Taking 6-month moving averages of New Orders and Shipments since January of 2006, it appears that New Orders are almost always higher than Shipments; however, when the New Orders moving average begins to turn down growth in Shipments becomes essentially flat or negative for one or more quarters. You can see this in the chart below. 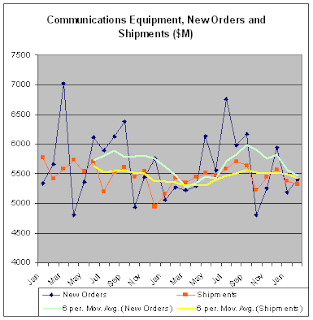 Given that Shipments translate directly into revenues, it certainly looks like we are in for flat performance at best over the next quarter or two. Goldman seems to have made the correct call.