Market internals improving - still not out of the woods

March 22, 2008
This week we can see what looks like a bottoming out in the markets but the indicators still signal caution. The chart below summarizes data from the last five weeks obtained by scanning about 7200 stocks each weekend using our Alert HQ process. 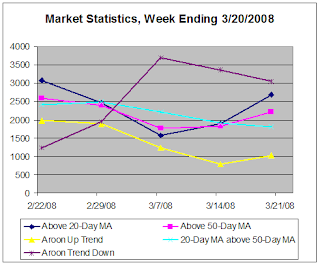 The fastest moving indicator is the number of stocks above their 20-day moving average. We have now seen an improvement in this number for two straight weeks though it is still a bit below where we were five weeks ago. Unfortunately, despite the rallies this week, less than half of the stocks we tested are above their 20-day MAs.

The situation is similar when it comes to the number of stocks above their 50-day moving average. Two weeks of improvement but it hasn't even gotten us back to where we were at the end of February.

The Aroon indicators tell a mixed story, as well. For the first time in five weeks we see the number of stocks that are signaling an up-trend has increased. And we have now seen two straight weeks where the number that are signaling a down-trend have decreased. This is a good trend to see but according to Aroon, there are still approximately 2000 more stocks still in a down-trend than there are in an up-trend.

In last week's post, I pointed out that the number of stocks whose 20-day moving average is above their 50-day moving average has continued to decline. I interpreted this to mean that many stocks have quite a ways to go before they exhibit bullish performance. We see that this dismal trend has continued this week with the number dropping for the fourth week in a row. This kind of cross-over event, when the 20-day crosses above the 50-day, is normally interpreted as quite bullish. The fact that we continue to see a decline in this measure is troubling.

We now have two weeks of data on Chaikin Money Flow. Things are starting to look a bit bullish here. The number of stocks undergoing reasonably strong accumulation (buying, with indicator greater than 0.22) has moved up from 536 to 600. The number showing reasonably strong distribution (selling, with indicator less than -0.22) has moved down from 760 to 643. Those being sold still outnumber those being bought but not by much.

The data this week show that by some measures, market internals are starting to look more positive. Still, we only have two weeks of improvement and the improvement is definitely not across the board. It it still too early to assume this bear market is over. We're not out of the woods yet.