Market internals continue to improve despite down week

March 29, 2008
This week market statistics are again positive. This is despite the fact that two of four major averages finished the week on a downbeat note. With the Dow and the S&P 500 losing 1.2% and 1% respectively we have apparently been saved by the NASDAQ, which gained a slim 0.1%, and the Russell 2000, which gained 0.3%. It was enough to keep the market internals on an up trend for the week as a whole. 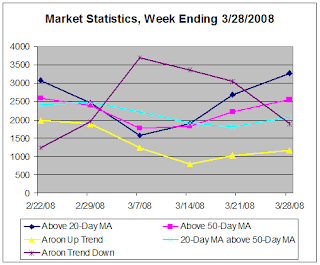 Looking at the chart above, we see that over the course of the last six weeks there has been significant weakness followed by recovery.

This week we have the highest number of stocks above their 20-day moving average that we have seen since we started gathering these statistics. That's the good news. The bad news is that it is still less than half of all stocks that we test (each week we look at about 7200 stocks).

The number of stocks above their 50-day moving average also improved compared to last week and has finally gotten back up to the level we saw when we started collecting these statistics.

The Aroon indicators show that the number of stocks showing strong down-trends is declining rapidly while the number showing strong up-trends in increasing slowly. This is somewhat of a mixed result but at least things are going in the right direction for the bulls.

This week we finally see a small increase in the number of stocks whose 20-day moving average has exhibited a bullish crossover above the 50-day moving average. Last week, this statistic continued down while the others we track all headed up. Nevertheless, investors shouldn't get too excited as the improvement was slight. It continues to show how far many stocks have to go before it can be said an up-trend is in place.

An ominous note is sounded by the Chaikin Money Flow statistics. We have only been capturing this indicator for three weeks now and it is not yet on the chart. Based on the first two weeks we saw a positive progression. This week we see the number of stocks exhibiting strong distribution has increased while the number of stocks exhibiting strong accumulation has declined. In other words, selling has strengthened and buying has weakened.

The interesting aspects of stock market analysis are often the divergences. This has been a week full of divergences. Some major averages up, some down. A lack of follow-through after a strong rally. A large number of stocks starting to show the beginnings of positive performance but other indicators signaling the progress is precarious. And though progress has been made, many stocks are still digging out from significant declines.

Should this week's statistics lead one to be cautiously optimistic? The trends are starting to look positive but the absolute numbers are still weak. As I said in last week's post, we are not out of the woods yet.