March 08, 2008
This week our Alert HQ market scan process has provided further evidence of a deterioration in market internals. Since we now have three weeks worth of data, I have chosen to present the latest data in chart form.

As can be seen, all the positive types of indicators are trending down. The only thing that is trending up is the Aroon Down indicator that is used to identify stocks in a down-trend and that one jumped sharply. 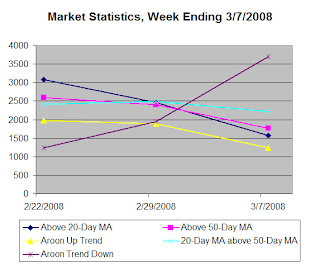 It appears that the deterioration picked up speed this week. This can be determined by noting that the change from the previous week is greater than that in the week before.

Given that in this last week the Dow lost 3%, the S&P 500 lost 2.8% and the NASDAQ lost 2.6%, it is not surprising that the positive indicators are trending down. What is surprising is how widespread the damage is. Looking at the Aroon down indicator, it appears that nearly half the stocks out there are in a short term down-trend. Only 1500 stocks are still above their 20-day exponential moving average. That is barely 20%. Stocks aren't doing all that much better in terms of their 50-day moving averages, either.

The picture is unrelentingly bearish.

This week, financials did their part to sour investors attitudes. Reports of Thornburg and Carlyle being hit with margin calls weighed on the market. Standard & Poor's downgraded Washington Mutual. Ambac finally announced their recapitalization plan and it was a huge disappointment. Widening spreads are showing up all over the place but this week's news related to elevated spreads between 10-year Treasuries and agency debt such as that issued by Fannie Mae and Freddie Mac. It is becoming harder and harder to trade even the most solid debt instruments.

Payrolls were the other big news. ADP came in negative earlier in the week and the government's February Non Farm Payrolls numbers followed suit on Friday. The government reported a loss of 63,000 jobs rather than a small gain. This makes two months in a row showing declines, something that always seems to precede a recession.

What had been expected to be a big drop in the markets Friday actually turned into only a modest sell-off of less than 1% in the major averages. Are investors just getting tired of bad news and now rally when news is not as bad as it could be? I also noticed that in the afternoon on Friday the market took off when it was announced that consumer spending in February was up about 3% from the weak level in January. On the face of it, this seems like good news. I read, however, that this was nearly all in the form of credit card debt. Already over-indebted consumers getting more in debt. With credit card payment delinquencies already rising at lenders, I'm not sure this spending news was so great after all.

Where do we go from here?

This coming week, has a long list of reports including the following: weekly crude inventories, retail sales, initial claims and CPI. The first could move oil prices, the last three could certainly move the markets. With stocks looking oversold, any positive surprises could cause an enthusiastic rally.

On the technical side, the charts look awful. The S&P 500 closed below 1300 on Friday, the lowest level since summer of 2007. It has blitzed down through support in the 1325 area. In terms of closing prices, it is well below the January low though it has not quite fallen past the January low intra-day price. If we don't see some strength creeping back into the market soon, we could easily see 1275 on the S&P as the next stopping point. This would be only a further 1.3% decline. If that level doesn't hold, we might see a slip down to 1230.

With my current trading portfolio mostly in ProShares UltraShort ETFs, I am making some money as the market slides. Nevertheless, it is painful to see the averages decline, job losses mount and homeowners face foreclosure. I certainly look forward to reporting better days on this blog.