This market will recover sooner rather than later - but in the meantime, run for cover

January 24, 2010
As I mentioned in yesterday's Alert HQ post, SELL signals dominate after a week in which stocks slid sharply. Here are the reasons most commonly given for the decline in stock prices:
Are these good reasons for the markets to tank? I don't think so.

This leads me to think that the market is falling just because it has gone too long without a correction. Which implies that this rough patch will run its course and the up-trend will continue.

Here's why I think the market will recover sooner rather than later:
My take is that we are seeing more of a technical move in stock prices rather than a situation where investors are shocked at a decline in fundamentals. To me this implies this pullback, though it might lead to the kind of 10% decline that is characterized as a correction, will not be especially deep nor particularly long in duration.

So if this pullback is primarily technical in nature, let's examine some of the technical underpinnings of this market. The following charts are derived from data collected during our Alert HQ process and they provide a high-level look at a couple of the indicators we track across the whole market. 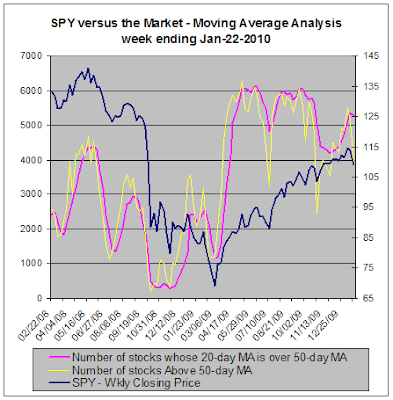 For this first chart we count the number of stocks above various moving averages and count the number of moving average crossovers, as well. We scan roughly 7000 stocks and ETFs each weekend and plot the results against a chart of the SPDR S&P 500 ETF (SPY). You can see that yellow line that tracks the number of stocks above their 50-DMA has plunged below the magenta line that tracks the number of cross-overs. This kind of action is generally followed by further weakness until the magenta line traces out a more distinct decline. This suggests investors could be in for more pain. 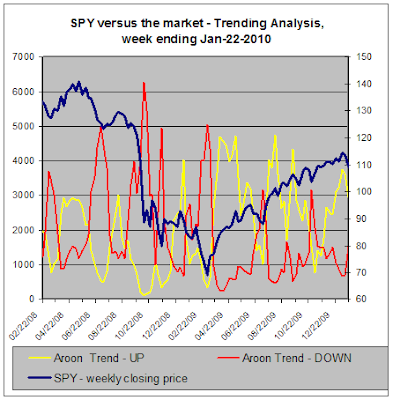 This chart shows a nasty situation developing. The number of stocks in downtrends (the red line) was about as low as it has been in the last two years. It's no surprise then, that the direction of least resistance for this indicator is up. Similarly, the number of stocks in up-trends had reached a high level, though not an extreme level, so it is not shocking to see the indicator drop.

Given that we tracked these indicators across pretty much the entire market, let's do a little technical analysis on the Vanguard Total Market VIPERs ETF (VTI) 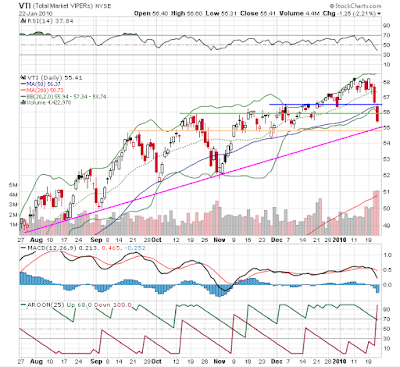 You can see that the ETF has already fallen through two support levels as designated by the blue and green horizontal lines. VTI has also fallen below its lower Bollinger Band and its 50-day moving average. MACD has broken in a bearish direction and Aroon has, too. All told, the damage has been pretty severe and it has occurred in quite a short time.

You can also see that we are pretty close to the next support level (the orange horizontal line) and the trend line (the magenta line). A move below where these two lines intersect, in the $55 area, could easily see the ETF fall to the $51 to $52 range. And that would give us a full-blown correction.

Technical analysis suggests this market has further to fall though we could easily see a little bounce early this week. On the other hand, the fundamentals still support a bullish outlook.

So, while Mr. Market works his way through this pullback, it is prudent for investors to just step aside or run for cover. On the other hand, I would NOT short this market.

In my opinion, given that the long-term trend in stock prices and fundamentals are both positive, the best idea is to keep some powder dry. The BUY signals could be back next week!