January 06, 2010
SEMI, global industry association serving the manufacturing supply chains for the microelectronic, display and photovoltaic industries, recently released their forecast for semiconductor equipment sales for 2010 and 2011. The results are optimistic, indeed.

Here is the money quote:

Despite the torrid growth rates forecast by SEMI, you can see that even by 2011, semiconductor equipment sales will not be up to the level of 2007. Talk about an industry downturn!

Another interesting aspect of the forecast is the following table that breaks things down by equipment segment.


Note the yellow highlight. This shows that the segment with the largest projected growth is Test Equipment. SEMI is looking for over 60% growth in this area.

The list of publicly traded semiconductor test equipment companies is not particularly large. I'll list several here:
All of these companies have been doing well lately. Here I try to squeeze them all into one chart: 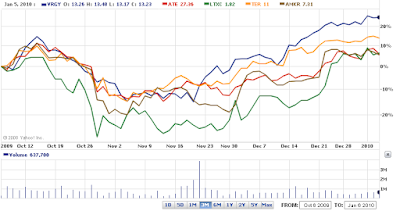 With these stocks, the whole story is what may transpire in the future. Everyone of them is coming off a money-losing year. Amkor at least has positive Enterprise Value/EBITDA ratio, while the others do not. In general, the financials for these companies are a mess after two years of the bottom falling out of the industry.

There are some analysts who say that the SEMI forecast is way too optimistic. EETimes says that SEMI has admitted there are no brand new foundries planned for 2010. EETimes is quite bearish on the semiconductor equipment sector despite several large contract manufacturers spending significant sums on new equipment in 2009. For example, TSMC spent $4.5 billion on new equipment in 2009, but then again, what's their budget for 2010?

So if chip vendors don't ramp up demand for manufacturing equipment as much as SEMI expects, there is still potential in the test equipment sector. Test equipment is less expensive and can help to increase yields and efficiency and reduce waste - all things that help to improve margins.

I myself like Verigy because one of their specialties is testing system-on-a-chip semiconductors. This is a growing area as more and more OEMs look for further integration in order to offer increased functionality at lower prices. The market seems to like Verigy, too, as their chart shows them as top performer among the five stocks listed here.

Add these stocks to your watchlist and look for first quarter earnings results. Let's see if that forecast is playing out as SEMI predicts.