Slouching out of 2009, stocks look for direction this week

January 03, 2010
The last week of 2009 provided a less than thrilling end to a year that supplied more excitement than most investors could stand.

Economic reports, however, were pretty decent. The weekly initial jobless claims turned out much better than expected. Chicago PMI wasn't bad either.

The lack of news, earnings, debt blow-ups or any other market-moving catalysts left the skeleton crews left on trading desks working to protect the gains of the last nine months. That meant selling. And it leaves us with nothing much to review today except the technical analysis situation.

Charts of some of the statistics we track at Alert HQ are presented below. 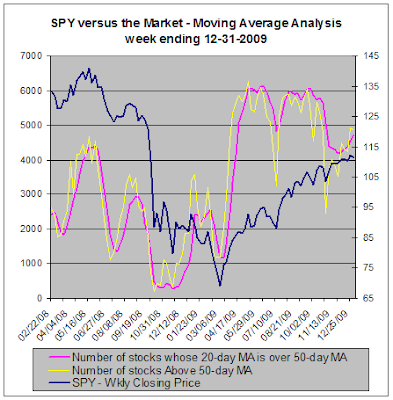 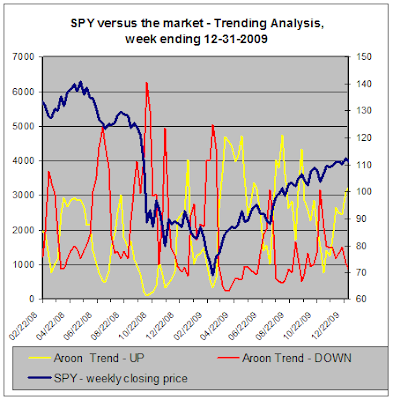 Now that we've reviewed some statistics based on analysis of roughly 7000 stocks, it is useful to take a look at a chart representing the overall stock market. A good candidate for this is the Vanguard Total Stock Market ETF (VTI). Support levels are drawn in blue and the trend line is drawn in magenta. 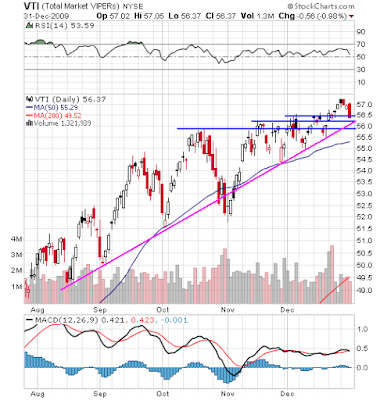 The chart shows the weakness we've seen this past week. The ETF has just sneaked below the first support level but there are a couple more support levels to go before there is any need to worry. Similarly, though the ETF has fallen, it has not yet penetrated its trendline.

So far so good. You can see, however, that the trendline and the middle support line intersect at about the $56.25 level which is not too far from where the ETF is today. There is a danger, therefore, that a couple of tough down days would serve to break below the trendline significantly and signal a bearish reversal.

Stocks appear to be technically showing a fair amount of broad-based strength yet they have not reached extreme levels. Major averages have made new highs and have now backed off a bit. Will the January effect kick in a take us to significant new highs?

After the lack of news during the holiday period, traders will looking for something to evaluate. With a solid list of economic reports coming up this week, there will plenty to analyze. This week's reports include construction spending, the ISM purchasing managers index, factory orders, auto and truck sales, the ADP employment report, the ISM services index, weekly initial jobless claims, hourly earnings, the big Nonfarm Payrolls report and consumer credit. In other words, there will plenty of opportunity to gauge economic activity and the state of employment in the U.S.

As the new year begins, I think stocks are holding up well enough to deserve optimism. Similarly, many economic indicators have been on the road to recovery and thus far show no signs of serious weakness. It is inevitable we will see a serious pullback at some point but I don't believe we are at that point yet. So for now, let's welcome the new year and look for further gains in stocks!