Iron Mountain breaking out - should you invest?

January 11, 2010
If you are a regular user of stock charts, sometimes you see a textbook pattern develop. That seems to be what is happening with Iron Mountain (IRM).

The stock showed up on this weekend's Trend Busters list (http://trade-radar.com/AlertHQ/trendbusters.html) as a BUY signal. In other words, it looks the stock has been in a down-trend and has suddenly turned up. Here is the chart: 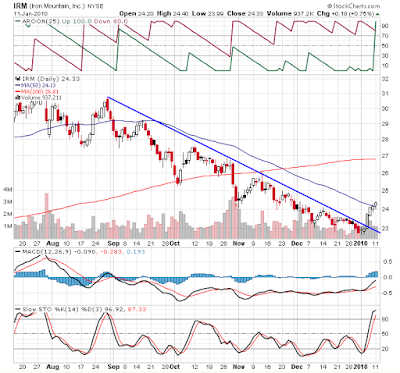 Iron Mountain has been in a prolonged down-trend since the end of August (see the blue downward sloping line). It is amazing how perfectly the stock tracked that blue trend line all the way down. This makes the recent upside breakout that much more impressive.

Other aspects of technical analysis suggest the move may have legs. MACD has decisively turned up. The stock closed above its 50-day moving average today, a day when tech stocks were under pressure. The Aroon UP indicator has shot from nearly zero up to 100.

I've also showed the Slow Stochastics which shot up from over-sold to over-bought in the last few days. For those with a more short-term focus, this suggests the stock might pause and drop back a bit, perhaps affording a cheaper entry point.

So what does Iron Mountain do? The company is a leading provider of data backup and archiving services. In other words, if you have boxes of data records that you need to keep for legal reasons, Iron Mountain will pick them up and store them for you. If you use tapes, for example, to back up the file servers or database servers in your data center, Iron Mountain will pick up the tapes and store them for you in the event you have a problem and need to restore the data. Beyond simple storage, the company offers further services including records management, data protection and recovery, and information destruction.

Iron Mountain is a $4.95 billion company which means the company is considered a mid-cap. More importantly, is it cheap or expensive?

Valuation indicators show the stock to close to value territory. The Price-to-Sales ratio of 1.64, Price-to-Book of 2.4 and the Enterprise Value/EBITDA ratio of 9.243 are all quite reasonable. The forward PE of 22 is not too bad for a tech stock.

On the other hand, a PEG of 1.79 is a bit high. The real problem with Iron Mountain, however, is related to debt. The Debt-to-Equity ratio of 1.61 is a bit high and the $3.1 billion dollars of debt the company carries is more than three times EBITDA which leaves the TradeRadar Survivability indicator flashing "caution."  The Interest Coverage ratio for the most recent reported quarter is only 2.38; typically, a value below 2.5 is considered to be a warning sign. The chart below this has been a problem for some time now:

On the positive side, the company's cash flow yield is solid and the year-over-year quarterly earnings growth of 281% shows the company is building some momentum coming out of this recession. It's most recent quarter was actually pretty good and suffers in comparison only to the quarter before when the company had record net income and record net margin. The following chart shows the last five quarters:

Click on this chart to look at the last 10 quarters and you will see that revenues have only dipped slightly; the company has not suffered as badly as many other companies did during this recession.

Iron Mountain's quarter ended in December so they are due to report sometime this month or next. The current breakout, then, is probably based on high expectations for the upcoming earnings report. Sequential revenues have been rising for the last two quarters and net income has also been doing well so the expectations are probably well founded.

The company is an industry leader in its niche with only one major publicly-traded competitor, Cintas (CTAS). And it's a good niche to be in. The last two decades have seen an explosion in the amount of data generated by corporations and that trend has not abated. Furthermore, regulatory rules regarding maintaining critical data for years has increased the need for corporations to put all that data somewhere. Both of these factors mean good times for these companies should continue.

So Iron Mountain looks very good from a technical analysis point of view and the potential earnings growth is solid. The only question is whether the company can continue to grow net income strongly enough to keep the high level of debt from swamping the company. Given that the company has survived the recession despite all that debt, the answer is that Iron Mountain will probably be alright.