April 22, 2009
Today there were a couple of posts about how tech stocks are currently especially attractive because they hold plenty of cash and tend to have little debt. Paul Kedrosky initially caught my eye with his post "Tech Cash is King" which in turn pointed me to a story on Bloomberg by Eric Martin.

I ran a screen tonight that looked at both cash and debt. Specifically, I screened for a Price-to-Cash ratio under three, a Debt-to-Equity ratio under three and a Market Cap greater than $2.5 million. Based on these criteria, I obtained a list of 136 stocks.

Judging from our list, it is absolutely true that many tech stocks do seem to have lots of cash and little debt. What also became apparent as I went through the list is that there are also a lot of pharmaceutical companies that meet these criteria. Below is a shortened list that should give you a general flavor of this screen's result:


The articles today discussed how tech has outpaced all other sectors in stock price gains thus far this year in part due to the attractiveness of their strong balance sheets. Given what we see in the table above, I was curious how the pharmaceutical sector has fared in comparison to tech. 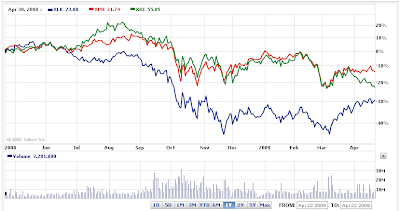 The chart above compares a tech ETF (XLK), a pharma ETF (XPH) and a biotech ETF (XBI). You can see that tech has indeed rallied more strongly in 2009 but it is also apparent that the pharmaceutical sector in general held up much better than tech during the severe stock market decline in 2008.

Pharmaceuticals benefit not only from their cash holdings and lack of debt. It is also true that they are generally considered a defensive sector due to the tendency for demand for their products to remain steady even during economic downturns. These strong balance sheets, however, must also play a part in why they are viewed as attractive stocks during tough times.