Is this the long awaited pullback? ...charting the S&P 500

April 20, 2009
It's been a while since I did a post devoted solely to technical analysis of a stock or index but now seems like a good time.

Market technicians have been watching in awe as the market put together six straight weeks of gains. Every pullback turned out to be a "buy the dip" opportunity for the bulls.

Today, we finally had the kind of down day technicians were predicting given how far and how fast the market had climbed.

With IBM and Texas Instruments beating earnings expectations after the close today, perhaps the market will rebound as it has done so often over the last six weeks.

If it doesn't rebound, though, where might we be headed?

The move from the March 9 low to the April 17 high is so clear that it seems to cry out for Fibonacci retracement analysis.

Rather than draw a bunch of lines on the chart below we have added two bubbles. The light green bubble is in the vicinity of the 38% retracement which would be at roughly the 796 level. Note that this is also an area intersected by the 50-day moving average. To further add congestion in this area, this is also a level that previously offered resistance and support as denoted by the horizontal yellow line.

The convergence of all these technical factors in one area suggests that this vicinity will provide strong support to the S&P 500. If it falls below this area, though, the next stop can be expected to be at the next Fibonacci retracement level, 50% down from Friday's peak. This area, centered around the 773 level, is denoted by the light blue bubble. 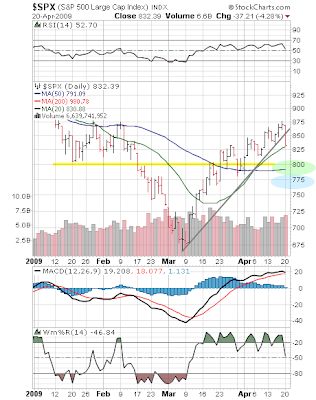 I have drawn an upward sloping trend line from the March 9 low (gray line). You can see how steep this line is, indicating how abrupt and robust this rally has been. Today the index easily broke below this line. Note that volume picked up today, too, suggesting that today wasn't just the absence of buyers.

MACD hasn't rolled over yet but it's getting close. It takes more than one day, though, to affect the moving averages that make up MACD and get them to head in a new direction. A bit more weakness and it will happen.

Williams %R has dropped out of the overbought area and indicates a transition is underway.

Today's 4.28% decline put a real dent in this rally but the index still managed to stay just above its 20-day moving average. Another day like today, though, would take the index down through the 20-day MA and the next stop would be that congestion area at 796 that we described above.

After this long discourse on the technical aspects, my strong suspicion is that we are, in fact, dependent on the earnings reports we see coming out over the next few weeks. Today, investor sentiment seemed to take the "glass is half empty" attitude despite the fact that recent earnings reports for a selection of bellwethers were reasonably decent.