March 31, 2010
iSuppli recently published a study contending that the next big thing in hi-tech is the femtocell. Two questions immediately come to mind: what the heck are femtocells and can an investor make money on them?

Femtocells are cellular base stations that improve indoor wireless coverage. Femtocell base stations improve 3G cellphone coverage inside buildings or homes — locations where wireless signals tend to be weak because of building materials blocking the signal or the site’s distance from a cell tower. A femtocell acts somewhat like a WiFi hotspot or a wireless router, providing access to the cell carrier's network for multiple devices within a building. With some carrier networks straining to keep up with the demands of increasing numbers of users surfing the web from their smartphones, femtocells are being looked at as a way to improve service without having to build as many expensive cell towers or spend so much to increase bandwidth.

iSuppli has this to say with respect to growth: femtocells are "headed toward critical mass among all major nodes of the wireless supply chain and will vault into explosive growth after reaching a decisive watershed this year." 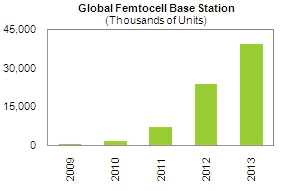 Leading companies in the sector --

Among several carriers who are rolling out femtocells, there is Vodaphone PLC in the United Kingdom who already has femtocells in service. Most carriers are so big that adoption or non-adoption of femtocells would not be a primary reason to invest in one of these of companies.

So much for the customers. What about the producers of femtocells and the semiconductors used in them?

There is one clear leader in the field: picoChip. This company, also based in the U.K., pioneered the femtocell SoC (system on a chip) market and currently claims to be the only company with products qualified for major carriers' networks and shipping in volume. They say they have 10 carriers as customers that are now offering commercial service using picoChip integrated circuits and sixty more in trials. picoChip seems to the company that owns the space and, sadly for investors, they are a private company.

The growth potential in femtocells has not gone unnoticed by some of the major chip manufacturers. Qualcomm (QCOM) and Texas Instruments (TXN) are now looking at getting into the market. Again, these companies are both so big that femtocell components will barely move the needle when it comes to overall sales.

OK, we've looked at customers for femtocells and producers of femtocells and no great investments jump out at us. Well, there are still the test and measurement companies. According to iSuppli, the two leaders with respect to femtocells are AirHop Communications and Continuous Computing. Tough luck again, though, as both are private companies.

Femtocells do seem poised for a real growth streak. For an investor, however, it's a frustrating situation. The best company in the sector is small, private and British. Even if they go public there's no guarantee their shares would be available to U.S. investors.

The best opportunity for an investor would be for a small U.S. company to acquire picoChip. A company where the boost from picoChip's sales would make a significant difference in the acquiring company's financial results. An interesting choice would be a company like SkyWorks (SWKS).

So for now, all we can do is keep an eye on the femtocell sector and see what happens. At least our cell service should improve while we wait for an opportunity to develop.