The screen actually identifies those stocks whose Cash on Hand, as defined above, is greater than 50% of it's market value. The screen then does a cross-reference with those stocks that just recently joined the TradeRadar Trend Leaders list. The result is in the table below:

The data was gathered over the weekend via the Alert HQ process so a few of these values may be slightly different if you look them up today.

Why is this interesting? Because when you buy a share of one of these stocks, you are not only participating in the growth potential of the stock but you are also protecting yourself from owning the kind of over-leveraged company that suffered so much during the Great Recession. Cash is a buffer, a kind of safety net in bad times. A large cash horde can also be a piggy bank that a company can rely on rather than tapping the debt markets -- the expectation being that debt is something that will become less and less attractive as interest rates begin to rise later this year or next year.

So looking at the table above, you can see that all of these companies have rather low debt to equity ratios. Not only that, as members of the Trend Leaders list they are all exhibiting strong up-trends in their stock prices. The result is momentum and safety rolled into one. Not a bad combination.

As the focus stock for today, I'll take a closer look at the stock that appears to offer the greatest value: INTL SHIPHOLDING CORP. (ISH). With the lowest PE, the lowest Price to Sales ratio and the highest dividend, this stock appears to have a significant margin of safety. The company operates a fleet of ships including types that transport cars and trucks as well as tankers, container and bulk carriers.

As further evidence of its value, the company's Enterprise Value/EBITDA ratio is a mere 4.3 and its dividend yield is a high 6.8%. In terms of financial results, the company is riding the trend of slow improvement in the global economy. Revenue is down a bit sequentially but up strongly year-over-year. Net Income has been increasing steadily since hitting a low point in Q4-2008.

Explore more ISH Data at Wikinvest
As mentioned above, this stock is on the Trend Leaders list. That means that Aroon, MACD and Wilder's DMI are all reasonably bullish. Here is the stock chart: 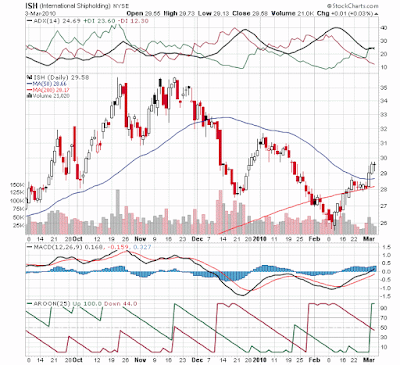 You can see that the stock has surged upward through resistance in the $28 range and is now above both the 50-day moving average and the 200-day moving average. In late January, the company reported a doubling in earnings compared to the year ago quarter but it didn't do anything to arrest the slide in the stock price. Early in February, however, investors seem to have reconsidered and the stock has been on a tear ever since.

It can be said that cash makes things interesting. Here are five stocks that manage to combine outstanding price performance with a comforting level of cash. Dig into this list and see if you don't find some compelling value mixed with a good dollop of momentum.

Disclosure: no positions in any stocks mentioned in this post