December 10, 2009
On Tuesday we saw a BUY signal for Adtran (ADTN) on our Swing Signals list. Back on Tuesday, after checking the chart, it looked to me like the stock was looking quite promising but was coming up against some serious resistance.

Now that it's a couple of days later, let's take a look at the chart below and see how things are working out. 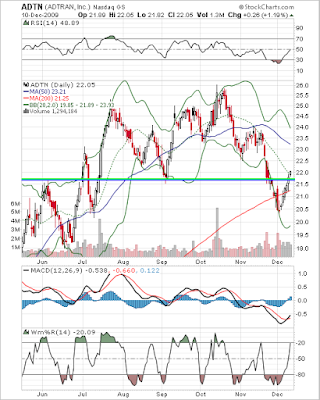 Adtran is a $1.39 billion networking company whose products support voice, data, video, and Internet communications. They are essentially in competition with companies like Cisco. Adtran sells primarily to large corporate customers and telecom companies.

The last three quarters show steady improvement. The outlook for tech continues to be favorable and there are no reasons to believe Adtran won't continue to benefit. The growth in gross margins shown on the chart should support further improvement in earnings. The company is cash flow positive and pays a dividend.


Currently however, the stock is not exactly inexpensive. The PEG of 1.88 suggests the stock is reasonably priced and is not cheap.The Price-to-Sales ratio, the trailing PE and forward PE are consistent with this assessment.

Valuation suggests upside could be limited in the near term but the chart looks like the stock might be on a roll. It looks like that dip below the 200-day moving average was just a head fake.