December 29, 2009
Ebix, Inc. (EBIX)  showed up this weekend as a new addition to our Trend Leaders list. It earned this distinction by registering bullish indications via MACD and DMI analysis. Here is the chart: 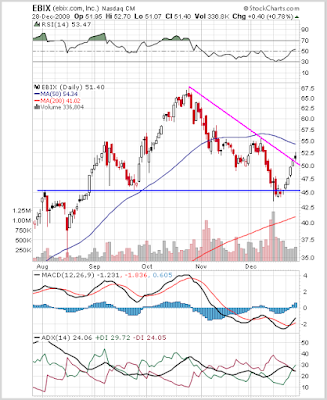 The chart shows that the stock has been in a downtrend since October. Now, however, it's beginning to show some life. It's making a strong recovery from the area around $45 and has broken resistance in the area around $50 as well as making a move above that downward sloping trend line.

A major channel for the company is the EbixExchange, On-Demand Software Exchange that offers products and services that automate, expedite, and improve the process for the life insurance, annuity, property & casualty, and health insurance industries. EbixExchange currently supports a broad range of insurance agencies, brokerage and clearing firms, and operations centers at over 100 of the leading insurance carriers and their affiliates. EbixExchange enables CRM solutions, Order-entry platforms, Quoting Engines, Risk Administration tools, Loss Reporting compliance, Data Transformation solutions and much more for the Life, Annuity, Health and P&C Insurance Industry.

Ebix has a market cap of $581 million and, as such, is considered a  small cap.

So the stock is looking promising from a technical analysis point of view but how are the financials? The chart below shows that the revenues and earnings have steadily increased every quarter despite the recession. Margins are looking pretty good, too.

In terms of valuation, the stock is still reasonably priced. Trailing PE is under 20 which is OK for a growth stock in the tech sector. PEG is under 1 which implies that the company's growth is not yet priced in. Price-to-sales is a little high but Price-to-book is reasonable. The Enterprise Value/EBITDA ratio is 15.8 which implies the company is in the vicinity of fairly priced.

In terms of management effectiveness, both return-on-equity (ROE) and return-on-assets (ROA) are pretty good and the combination is a sign that company resources are being used well. The company has very little debt.

In January, the stock will undergo a three-for-one split. After a positive performance at an investors conference in early December, where management confirmed the split, the stock ran into some headwinds. Some of the items discussed included the following:
The company is also planning further acquisitions which will increase its footprint internationally.

Ebix is a little known small-cap in the software sector that appears to have navigated the economic downturn handily. In fact, they probably prospered by providing cost reduction to companies that opted to discontinue in-house processing and instead adopt Ebix's web-based on-demand services or BPO services. The company seems well positioned to continue riding this trend and, indeed, management has already gone on record projecting double digit growth rates for the next two years.

With the chart turning up, it appears that the current pullback is coming to an end and investors may want to pull the trigger on this stock soon.

Proworkflow said…
Sales and earnings are going up through acquisitions. This is a typical multiple arbitrage story - EBIX buys businesses sub 10x EBITDA and brings them to Mr. Market who is currently paying 15x.Not sustainable until organic growth comes back. Look at BPO division - negative organic growth!
December 30, 2009 at 2:20:00 PM EST