Can Synopsys rise from the dead?

December 18, 2009
Last night I published the Thursday Swing Trading Signals and there was an interesting mid-cap tech company on the list. The company is Synopsys (SNPS).

Why do I question whether it can rise from the dead? Take a look at this chart: 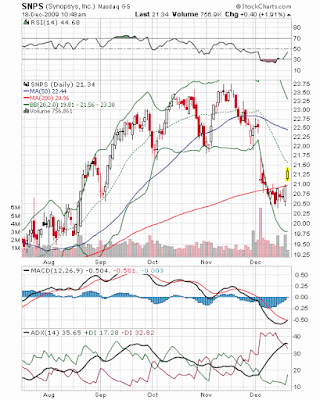 You can see that the stock got slammed in early December and was left for dead. The sell-off was induced by an earnings report where the company announced lower quarterly profit and sales as well as higher expenses.

Today, the stock opened with an upside gap and so far is holding its gains.

Synopsys, a $3 billion company, is a clear market leader in the EDA field. The following chart compares by revenue Synpsys to its competitors:

The company is not cheap but neither is it especially expensive. Value indicators are at moderate levels with a PEG of 1.4, price-to-sales at 2.26 and an Enterprise Value/EBITDA ratio a little over 6.

The company is cash flow positive and has no debt. The following chart shows revenue, net income and net margin over the last five quarters.

As you can see, revenues sagged during the worst of the downturn but are making a comeback. The best you can say about net income, however, is that it has been stuck in neutral for the last few quarters. Margins have declined recently, as well. Even as the semiconductor industry has been picking up in the last quarter or two, Synopsys and the EDA sector in general have continued to struggle.

Truth be told, Synopsys didn't do a bad job during the economic downturn, remaining profitable and comfortably in a leadership position in their industry.

The fact that the company's earnings are lagging those of the chip manufacturers is not surprising. Before EDA vendors or semiconductor equipment manufacturers can see significant growth return, the chip manufacturers need to begin to exhibit stronger demand. Providing we don't see a double-dip next year, that demand should return and companies like Synopsys should be able to return to growth.

As for today's move? I would be stunned to think that my simple site caused the buying so I am assuming that somewhere there is an analyst who upgraded the stock. Or perhaps management pre-announced better than expected earnings as we near the end of this quarter. In either case, the news has not been picked up by Google yet. Nevertheless, one could make an argument that decent growth in 2010 would mean the stock is cheap today. And technically, it appears the downdraft in the stock price has been arrested at the 200-day moving average so maybe it's just ripe for a swing trade.