Time to sell your stocks?

August 17, 2009
The stock market took a body punch today. Should you sell everything?

First up is the S&P 500. Check the red ellipse drawn on the chart. 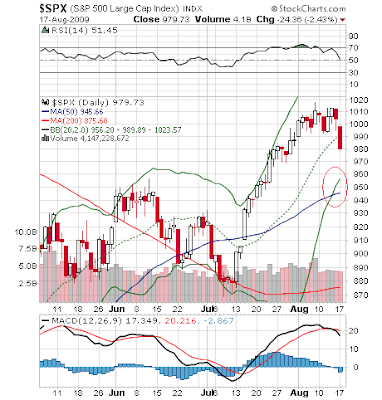 This ellipse highlights the area where there is a convergence of the 50-day moving average, the lower Bollinger Band and a short term support level established in June. In other words, this range from 945 to 955 should provide serious support for this important index.

This next chart shows the NASDAQ 100. Here we have drawn a red circle and a blue ellipse. 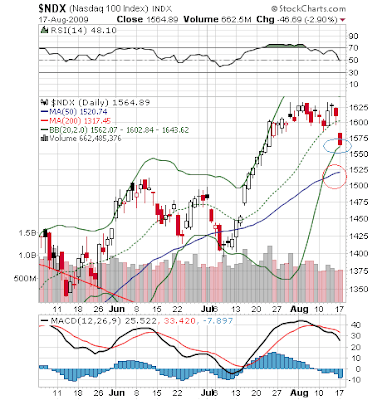 The red circle highlights the convergence of the 50-day moving average and the short term support level established in June, much as we saw above in the chart of the S&P 500. In the case of the NASDAQ, however, the lower Bollinger Band is higher than the previously mentioned indicators and the index has already slid pretty close to it. So the NASDAQ 100 has two support areas: the range from 1510 to 1520 and that range around the lower Bollinger Band at 1563.

The following points suggest that selling now is not the right move:
So hang on to your stocks. Indeed, if the major averages respect the support levels described above, it would be a signal to buy.