SKF versus the VIX

August 06, 2009
In my semi-rant about leveraged ETFs from Monday, I mentioned that the 2X ETFs can be held for longer than one day, especially when volatility is moderate to low. This post takes a closer look at this proposition.

I decided to take the worst case situation and look at the most maligned of the ProShares ETFs: SKF, the UltraShort Financial and its corresponding bullish ETF, the Ultra Financial, UYG.

To compare results to the underlying index, I also included IYF, the iShares Financial ETF.


One of the takeaways from the table above is that when the VIX trends upward strongly, as it did in the 3rd quarter of 2008, SKF becomes unpredictable. Indeed, SKF's correlation to the VIX essentially went to zero.

In the fourth quarter of 2008, the VIX was above 40 and swinging wildly (eventually peaking at 90) but it was not trending upward. This is when SKF endured some of its biggest spikes in price and volume. This period comprises one of the examples when IYF went down and, by the end of the period, SKF also registered a loss. You can see in the chart below how SKF's moves are an extreme exaggeration of the moves in the VIX. 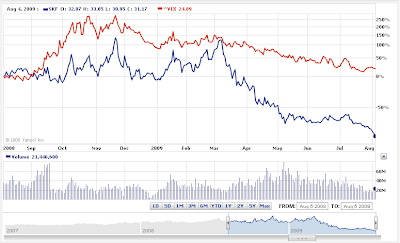 In the first quarter of 2009, the VIX remained high but no longer swung so wildly. In the second quarter of 2009, March saw a peak in SKF but as the VIX drifted lower and investors began to think the worst of the market downturn was over, SKF plunged from its March high.

This next chart shows how things looked with the other (non-short) ETFs when the VIX was high. It shows how the Ultra Financial (UYG) severely underperformed the underlying index. This, however, is as it should be during a time when the financial sector was severly underperforming the rest of the market. 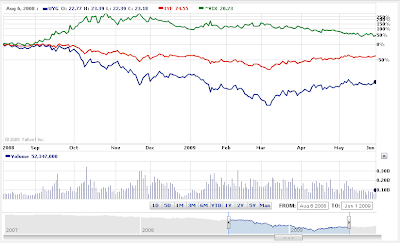 This next chart shows how things look when the VIX is trending lower as it has been so far this year. It shows how the Ultra Financial (UYG) has been comfortably outperforming the underlying index for more than four months now. 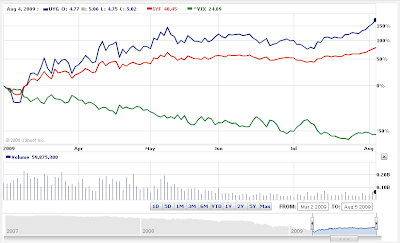 You might also notice in the first chart above that SKF is performing much more sedately now as the VIX has trended downward.

One of the odd results of this analysis is that UYG seems much more well behaved than its opposite, SKF. It more closely tracked its underlying index and maintained its expected inverse correlation to the VIX in a range that was reasonable.

SKF was indeed much more unpredictable and volatile. It's correlation to the VIX varied surprisingly and its inverse relationship to the underlying index was also exaggerated.

The only conclusion one can make is that SKF's performance was distorted due to the extreme volatility in the market and the extreme volume that drove the ETF compounded by waves of panic buying followed by frenzied profit taking. SKF was the ETF that corresponded to the sector at the heart of the plunge in world markets and became the vehicle through which everyone attempted to play the epic moves in financial stocks. This one ETF received an inordinate amount of trading which distorted its performance, caused it to suffer discounts and premiums to its true NAV and made settlement difficult at the end of the trading day. Even as volume in IYF spiked during the worst of the downturn, volume in SKF still remained 5 and 6 times that of IYF.

There are several points I am trying to make here:
The bottom line is that you can't say all leveraged ETFs should be outlawed because SKF performed unpredictably over investment horizons for which it was not intended.

You can say that leveraged ETFs are appropriate trading vehicles for investors who understand them. Hopefully, this analysis will help that understanding.