So why shouldn't stocks continue to rise?

It's been a month since I last posted charts of the statistics we track at Alert HQ. Are there any new insights we can gather from a review of these charts?

In the last month, the major averages have doggedly managed to climb a few percent, while all the while bears have been saying stocks are over-priced and heading for a fall.

Fundamentally, economic reports have been rather benign though stubbornly high levels of unemployment remain a worrisome factor.

Earnings season continued through the month and is pretty much over now. Many stocks beat lowered expectations and a good number also provided decent forward guidance.

So why shouldn't stocks continue to rise?

The two main weapons in the bears arsenal are:
My answer to the bears would be: "Yeah, maybe."

Here's why:
Well, those are my opinions. So where are the markets today and where might they be going? We look for clues in some of the charts that follow. The above chart, illustrating our moving average analysis, is at a bullish level but is indicating caution. Note that the number of stocks above their 50-day MA is slightly below the number of stocks whose 20-DMA is over their 50-DMA. This does indicate that, in the short term, this rally could be running out of steam and pullback could occur in perhaps a couple of weeks. This chart is an example of the over-bought thesis where roughly 80% of stocks are above their 50-DMA and, to many market observers, that seems like too many.

In a bull market, however, this chart takes on the characteristics of an oscillator. In other words, with each rally, the levels will reach where we are today. Each pullback will reduce the levels somewhat and then each subsequent rally will push the levels up again. I suspect that the 80% to 85% range can be considered a maximum bullish level and that's about where we are now. 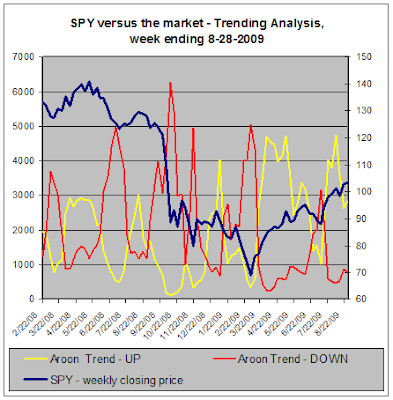 According to this chart, stocks are not particularly frothy or over-bought. Strong up-trends have been broken as stocks have moved sideways over the last week. Could the number of stocks in up-trends surge higher? Well, there is plenty of room for that to happen since we are not at an extreme level.

The two charts presented today do not paint a picture of a severely over-bought market that is ready to plunge.

It is likely that a pullback will occur within a week or two but I see nothing that would suggest that the pullback will be anything but minor.

So pick out a few stocks you would like to own (I'd suggest looking around at Alert HQ, maybe on the Trend Leaders list). There should be an opportunity soon to pick them up at prices 5% to 10% lower than they are today.