Baidu - primed for a trade?

August 21, 2009
Interested in an e-commerce stock with a Strong Buy rating?

Thursday night Alert HQ identified a well known stock that is often the target of fast traders. It looks like it might be poised for a quick gain again. Baidu (BIDU) appeared as a Strong BUY on our list of Swing Trading Signals. The chart follows: 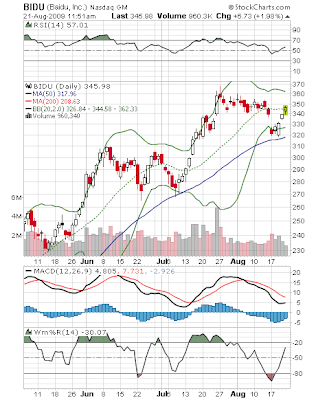 Note how the stock fell almost to its 50-day moving average without penetrating it. It did, however, drop below its lower Bollinger Band and then rebounded nicely. Williams %R also shows it moving rapidly out of the over-sold area. As I write this morning, the stock is just kind of peeking over its 20-day MA, having tacked on another 2% since Thursday's close.

With the stock already up roughly 2% today, the short-term target would easily be another 4% or 5% above this level. Further gains would depend on, you guessed it, the fundamentals.

So how are the Fundamentals?

Baidu has a forward PE of over 38 and a PEG of 1.5 so, once again, this is no value stock. The company, however, has shown steady and impressive growth as it has been one of the main beneficiaries of China's increasing Internet usage. The income statement snapshot below shows the growth in revenue and earnings clearly:

Explore more BIDU Data on Wikinvest
As a quick trade, Baidu looks pretty good and, as the Google of China, its long term prospects don't look too bad either.