October 19, 2008
Yes, craziness and volatility are now the norm.

Monday saw an absolutely massive rally, one for the record books. Wednesday saw a huge drop such that traders, after the fact, noted that the market had crashed again. Yet the Dow and the S&P 500 managed to finish the week up well over over 4% and the Nasdaq finished up 3.7%.

It is clear that Monday was a snap-back rally after the worst week the market had seen since the 1930's. Subsequently, the Treasury and the Fed announced that they would take direct equity stakes in banks, providing a capital injection in the process. This allowed stocks to more or less hold their gains from Monday.

On Wednesday, a number of economic reports came out that confirmed the bears worst expectations. Most notably, retail sales declined 1.2%, the worst seen in years. The Fed Beige book provided a consistent picture of slowing economic activity in all districts. The Philadelphia Fed registered a much larger drop than expected. Rumors of forced selling by hedge funds lent a note of desperation to the session as stocks sold off hard, giving up much of Monday's gains.

Thursday started on a sour note with markets headed downward again but a major rally began that lifted market averages over 4%. Some analysts say the rally was based on oil falling below $70 per barrel which in turn was the result of a weak industrial production report.

Friday, markets were way down, then way up and then closed unchanged. Friday's rally, while it lasted, was interpreted to be due to an article by Warren Buffet who said he is now buying stocks for his personal account. Barely noticed were more depressing numbers from the housing industry.

While the market was bouncing up and down, companies continued to report earnings. IBM, Intel and Google all reported good numbers. A number of financial institutions beat severely lowered expectations (big deal) while Citi and Merrill Lynch reported more multi-billion dollar losses. All in all, earnings have so far been mixed and this game of beating lowered expectations is somewhat suspicious to me.

Technically speaking, markets enjoyed a rebound this week but the charts are still ugly with solidly downward trendlines firmly in place.

Each week our Alert HQ process scans over 7200 stocks and ETFs and records their technical characteristics. Primarily we look for BUY and SELL signals for our free stock alerts; however, we also summarize the data in order to gain insights in the week's market action. The following chart based on daily data presents the state of our technical indicators: 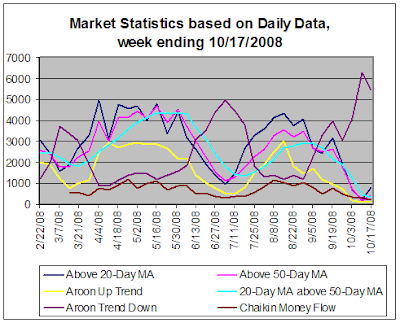 As for the trend indicators, we see some slowing of the negativity. We use Aroon analysis to generate our trending statistics. This week we saw the number of stocks in strong down-trends actually decreased to about 5500 out of 7200, still terrible but we'll take any improvement we can get. The number of stocks in strong up-trends managed to stay steady but at an incredibly low level.

We use Chaikin Money Flow to track buying and selling pressure. Still another week of the continuing down-trend in our buying pressure indicator that we have been seeing for weeks.

The next chart shows the data based on weekly data. The good news here is that the moves this past week were strong enough to impact the data in a positive way even though the curves are more slow moving than those in the charts based on daily data. 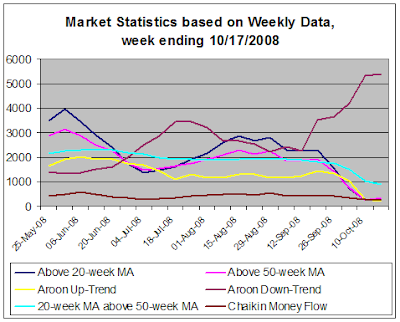 There appear to be four major factors at work:
All in all, the signals are mixed enough that investors shouldn't be too confident that "the bottom" is in. The question is: if the financial crisis is abating but a worldwide recession is coming to the fore, are stock prices too low or too high? Investors collective answer to that question will dictate the trend in markets.

The economic calendar will be very light this week with only leading indicators, initial claims and existing home sales. This should allow investors to focus on earnings and there will be plenty of quarterly reports to chew on. Use this link to check the earnings calendar at Briefing.com.