Citi: consumer down and out, economy, too

The report features the Citi Financial Conditions Index (FCI), a proprietary index that is a composite of a number of financial measures. The index is a weighted-average of six variables, including option-adjusted corporate credit spreads, equity values, the money stock, the trade-weighted dollar, mortgage rates and energy prices. It is stated in terms of standard deviations from a mean value. A reading of plus one sigma, for example, would suggest financial conditions are imparting a strong tailwind to aggregate demand that could promote inflationary imbalances and therefore may be a signal that monetary policy is overly accommodative. A reading of minus one sigma is suggestive of financial drag on the outlook that may point to undesirable slowing and rising unemployment.

So where does the index stand today? Here is the money quote from the report:

"At more than minus five standard deviations below norms, the FCI is probing depths beyond our experience. It suggests that especially harsh economic conditions are about to unfold."

The ramifications are widespread. The following chart relates the Citi FCI and consumer spending. The chart shows the FCI is well below the levels seen during the last recession. The chart also shows that the change in consumer spending as represented by the PCE is already measurably weakened and is projected to go even lower. 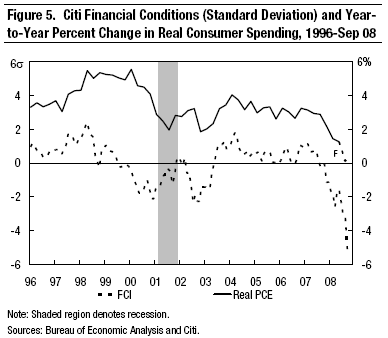 The report emphasizes that the pullback among consumers is becoming a key driver in what Citi unequivocally refers to as a recession. A consequence is that businesses are being forced to scale back spending and investing as the weak consumer contributes to a weakening in new orders. This was brought home by the recent poor durable goods report. More importantly, weaker spending has reinforced the slowing in hiring. Last Friday's Non-Farm Payrolls report showed that employment declined by 159,000, much worse than expectations. Based on this data, Citi thinks that labor market weakness is now pervasive.

Citi sees a series of cascading effects. The FCI shows extreme weakness in its financial measures. The correlation between a weak FCI and weak consumer spending appears to be strong. By extension, this will drive a slowing in production which will in turn drive a decline in employment which, in a self-reinforcing loop, will further weaken the consumer and so on.

The bottom line is that Citi sees the consumer and the economy to be down and out for some time to come.