Can the Saudis keep us from testing the March lows?

For example, I felt that whether or not all the bad news was revealed by the large banks, it was a foregone conclusion that these stocks would be dogs for months to come. Along came more news of write-downs and capital raising and, to my surprise, it took the market down as if it was something unexpected. Add to that the downgrade of the bond insurers and we had all the excuses needed for a sell-off.

Then we had the sectors most affected by high oil prices. Ford, GM and Fed Ex all contributed to the negative mood in the market this week but, once again, who would ever expect these stocks to do well in the current high cost energy environment?

I have pointed out that recent economic reports continue to be better than awful and that it indicates to me perhaps stocks have room to advance. That idea was overlooked this week as stocks tumbled despite core PPI that was moderate, a suggestion that housing starts are not decreasing so fast anymore and the fact that unemployment claims at least did not increase. A slight dip in industrial production supported the bears but the numbers are nowhere near recession levels.

In any case, investors were intent on selling stocks this week and they did so agressively. 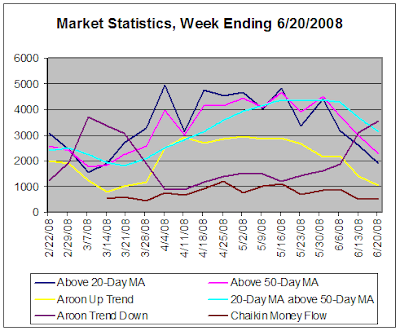 We plot six different indicators. This week, pretty much all of them reflect weakness in the broad stock market.

As a further effect, this week the number of stocks whose 20-day moving average is above their 50-day moving average also plunged. This is typically a somewhat slow moving indicator but this week's action tipped the balance for about 1000 stocks. Less than half of all stocks can now boast that they are trading in a bullish manner based on the 20-day MA above the 50-day MA .

Last week the signals from Aroon and Chaikin Money Flow analysis were fully in agreement with all of them painting a bearish picture. This week we have a small divergence that may be cause for hope.

We also plot the results of Chaikin Money Flow analysis. The number of stocks undergoing strong accumulation or buying managed to increase a tiny bit to about 530. Not shown on the chart is the number of stocks shown to be undergoing strong distribution or selling. This indicator decreased a bit to under 900. These are slim factors to hang our hopes on but it's about all we've got from a technical point of view.

The good news is that the S&P 500 managed to avoid falling below the support level in the range around 1310 to 1320. A break down through this level and there is precious little that would keep us from revisiting the March lows or worse.

Looking at how the sectors in the S&P500 fared, we see that things have gotten even worse than the previous week. There is really no positive news here unless you are overweight energy stocks and perhaps utilities.

The technical picture as described above is pretty bearish. Last week I mentioned that we were hitting oversold levels but that didn't prevent us from getting more oversold. As a result I am hesitant to bring up that old tune but it still applies. The S&P managed to hold an important support level and that is encouraging as is the slight improvement in Chaikin Money Flow.

It looks like fundamentals are key to this market, especially oil and the state of the financials.

With respect to oil, the news this weekend is that the Saudis have committed to raising production. It seems like only a couple of weeks ago they said they were raising production by 200,000 barrels per day. This last increase did nothing to boost the stock market. Now they say they are offering to increase output by another 200,000 barrels per day "if demand for such quantities materializes and our customers tell us they are needed." Will it even offset the decline in Nigerian production?

As for the financials, thank goodness it has been a quiet weekend, with no new shoes dropping other than a report Citi is laying off investment bankers. Citi has been talking about cost and staff reduction for months now so I assume this shouldn't be a market moving event.

Next week we will see a good number of economic reports that could indeed move the market. There is the FOMC meeting (what will they say? will they change rates?), consumer confidence, durable goods orders, new home sales and existing home sales, revised GDP and initial jobless claims among others.

If these reports continue as they have been, somewhere better than awful and worse than good, we will get to see a demonstration of investor sentiment. Will the glass be viewed as half full or half empty?