June 14, 2008
It was another tough week for stocks. As a result of a decent rally on Friday, the more narrowly focused indexes managed to show some strength but the broader market wallowed in weakness. For example, the Dow managed to gain 0.8% this week and the S&P 500 finished unchanged. The NASQDAQ, however, finished the week down 0.8%, the Russell 2000 index of small-caps was down 0.9%. The Russel 3000, which is more representative of the entire U.S. equity market, finished the week down 0.24%

As a result, it seems Friday's strength was centered in a modest selection of large-caps and the broader market continued to suffer or tread water. The narrowness of Friday's advance is borne out by the following market statistics which show stocks in general continuing the downward slide that began several weeks ago. 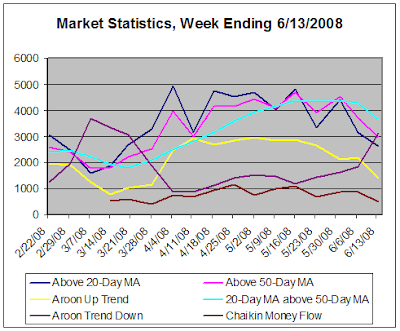 We plot six different indicators. All of them reflect weakness in the broad stock market.

We continue to see bad news across the board in the moving averages. The number of stocks trading above their 20-day moving average decreased again. If a move upward was being signaled, we would expect to see this indicator increase as more stocks moved above this short-term average. Unfortunately, that is not the case.

We see the same kind of continuing weakness with respect to the 50-day moving average, as well. This is a good indicator of how much damage the last few weeks have done to stocks in general. Well less than half of all stocks have managed to stay above this important moving average.

In past weeks we have seen small divergences in signals from Aroon and Chaikin Money Flow analysis. This week they are fully in agreement.

The Aroon analysis we do shows stocks in strong up-trends or down-trends. The chart shows the number of stocks found to be in strong up-trends dropped precipitously last week. That makes three out four weeks we have seen the number decrease. The number of stocks determined to be in a strong down-trend jumped steeply this week, moving all the way up to over 3000 or about 42% of all stocks we examined.

Once again this week economic reports were reasonably benign. The CPI came out on Friday and showed core inflation rising but under control. This was the impetus that encouraged Friday's rally in stocks. With the dollar showing strength, oil prices at least finished the week off their all-time record high. M&A activity showed that there is still sufficient liquidity in the market to support significant buyouts. Finally, the Fed signaled that rate cuts have probably come to an end. None of this implies that markets should fall off a cliff nor does it imply markets are poised for double-digit gains.

With respect to the technical analysis data though, the outlook is decidedly negative. The only good news in this week's data is that things look so bad it appears stocks are at a significantly over-sold level. A little help from a decrease in oil prices, a benign reading from the Producer Price Index and less than horrible earnings from the several investment banks reporting this coming week could see this market turn around. Absent those catalysts, the technical trends indicate we could see a further slow grinding downwards.