December 17, 2007
Yesterday I wrote a post describing my opinion on the direction of the markets. I focused on the S&P 500 and, after reviewing the chart situation, came to the conclusion that the most likely direction was down.

Today we opened with gap to the downside and the index never recovered. The gap is clearly visible in the chart below which shows what happened to the S&P 500 SPDRS (SPY) ETF. 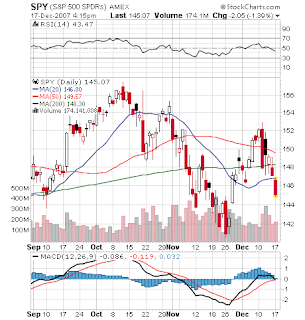 The chart now looks worse than it did Friday. Today's sell-off came on decent volume but not extraordinary volume. This implies we have not yet seen the kind of capitulation that marks a bottom. Note also how the MACD on the chart above is on the verge of confirming the bearish direction. It looks like SPY might have a bit further to fall.

Your blog is nice and informative. We think your visitors will like this posting.

We all know that Indian stock market has become volatile now a days. One day its going up and another day its coming down. So we all should like to know
what is the reason for it. As in the last post we have mentioned that FII are the main reason, but now to there are few more factors adding to worries, they are:-

3. 25 Basis cut which was expected by US people of atleast 50 basis.

4. Low volumes due to holidays in coming week.

We suggest you to take bit long positions right now as market is volatile so don’t prefer intraday trading for few days.
All scripts are currently trading at low price hold them for 10-15 days so gain maximum.

Dear Visitors, This blog is really nice and informative. We are pleased to know this blog is really helping people. Its our pleasure to post informative content on this useful blog created by webmaster.On 29th Feb 2008 budget was declared. It was expected to be in favor of middle class people . As in budget all loan of farmers were waived off, its a
Positive news for farmer which can give rise to agro based industries too. Overall budget was good for everyone. Now with time USA is coming out of the jinx of sub prime and recession and we have already witnessed some good movement in US market too. Recent fall in Indian stock market was due to Overbought Nifty, USA recession margin pressure and panic. Now Nifty is in consolidation phase. Once consolidation is over we will see major rally in the stock market.Please visit our website www.shareinfoline.com
June 5, 2008 at 12:08:00 AM EDT

KnowYourProfit said…
This blog is novice and informative,it is a pleasure to post a comment on this usefull blog created by a webmaster

Now as such the final stages of the formal completion of nuclear deal has come,so we can expect some positive news effecting the
movement of the INDIAN STOCK MARKET which means stocks coming in power sector will take new direction

Companies which will benefited includes mainly

KnowYourProfit said…
This blog is quite nice and informative, it is our pleasure to post a comment on this usefull blog created by a webmaster

We welcome your Quieries at