December 20, 2007
So NetSuite (N) went public today at $26 and the shares moved sharply as some IPOs tend to do, closing at $35.50. This is in spite of the fact that the price had already been adjusted upward twice before the stock came to market. The company is in a hot sector and Oracle Corp. (ORCL) CEO Larry Ellison controls a majority stake and this has contributed to the buzz around the stock.

NetSuite operates in the Software-as-a-Service (SaaS) sector. It provides business applications over the Internet so that customers do not need to install the software in their own datacenters. NetSuite offers an all-in-one solution that integrates accounting, sales, payroll, order fulfillment, purchasing, inventory, billing, CRM and more. It provides features that support eBay and offers a facility for users to create web sites that integrate tightly with the underlying accounting and inventory functions. Much like SalesForce.com, NetSuite has sales force automation (SFA) capabilities to oversee and manage the entire selling process including sales order entry, post-sale follow-up and support and up-sell opportunities.

The company is offering only about 10% of the shares available.

Quarterly data was provided in the SEC filing and here is where I started to get wary.

Since the March 2006 quarter, revenue has been steadily increasing by roughly $2M to $2.5M per quarter. As an investor, I would rather see revenue accelerating instead of increasing at a linear rate.

Many analysts point out that, though the company remains unprofitable, losses have been decreasing over time. Yet it is clear from the chart below that NetSuite has had one quarter that showed great improvement, otherwise the company has been growing somewhat slowly. 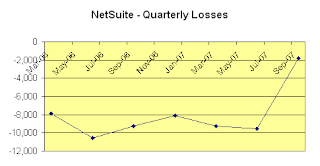 Why such a good quarter? In the most recent quarter, ending September 30, it looks like expenses were significantly held in check compared to prior quarters. For me, it raises the question of whether this expense reduction is an artificial one-time event, part of an effort to make the IPO attractive. The SEC filing admits that product development costs are likely to remain high. This is one of the main expense drivers and it is one of the categories that showed the biggest expense reduction in the September quarter. In defense of NetSuite, however, I have to say that even if product development costs had remained flat, it would still have been a much improved quarter.

NetSuite is aimed at small to medium-sized businesses and, as discussed above, pricing is modest for the medium-sized companies and quite low for small businesses. It's sure going to take an awful lot of customers to justify the two billion dollar market cap the company attained today.

According to an article in InformationWeek, NetSuite admits its single data center is located in a third-party facility in an area of California that's vulnerable to earthquakes. It has no back-up facility that can be used as part of a disaster recovery plan. As customers begin to demand disaster recovery as part of the product package, this will become a significant expense for NetSuite.

Much like VMware (VMW), NetSuite offered a small percentage of shares to the public and the market cap has now ballooned to a point where the valuation can be questioned. Unlike VMWare, NetSuite has yet to show a profit and has significant competition in its market today. Just like BigBand Networks (BBND) registered one excellent quarter and went public, we see NetSuite doing something similar.

Though NetSuite is in a hot sector, SaaS, the company has a way to go before it can justify its current stock price. This does not mean, however, that investors will not push the price even higher before it begins to return to earth. The company has great promise but I would not be buying the shares at this time.

Disclosure: author has no positions in any stocks mentioned in this post

Your blog is nice and informative. We think your visitors will like this posting.

We all know that Indian stock market has become volatile now a days. One day its going up and another day its coming down. So we all should like to know
what is the reason for it. As in the last post we have mentioned that FII are the main reason, but now to there are few more factors adding to worries, they are:-

3. 25 Basis cut which was expected by US people of atleast 50 basis.

4. Low volumes due to holidays in coming week.

We suggest you to take bit long positions right now as market is volatile so don’t prefer intraday trading for few days.
All scripts are currently trading at low price hold them for 10-15 days so gain maximum.