November 02, 2010
Do two data points make a trend? Breakouts by power semiconductor companies are starting to establish a pattern. A couple of weeks ago I wrote about ON Semiconductor (ONNN) in a post titled "ON Semiconductor -- on a roll as it breaks out". Today we have a breakout by Power Integrations (POWI) that is worthy of notice.

The stock has appeared on our Trend Busters list based on weekly data. Here is the weekly chart: 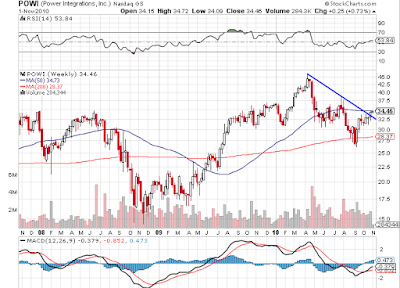 Note the breakout above the bearish trend line. If you look at a chart based on daily data, you will see that the stock is challenging its 200-day moving average. A little nudge and a bullish trend could be confirmed.

Power Integrations, Inc. designs, develops, manufactures, and markets proprietary, high-voltage, and analog integrated circuits for use in high-voltage power conversion. Their ICs are used in TV set-top boxes, DVD players, desktop computers, liquid crystal display monitors, and power adapters for notebook computers as well as power supplies for home entertainment equipment, appliances, light emitting diode (LED) light fixtures, and desktop PCs. The list of applications goes on and on; suffice it to say that the company's products are designed into a wide array of consumer electronics.

Power Integrations is necessarily a cheap stock but growth stocks never are. The following shows the Fundamental Analysis screen from Trade-Radar Stock Inspector: 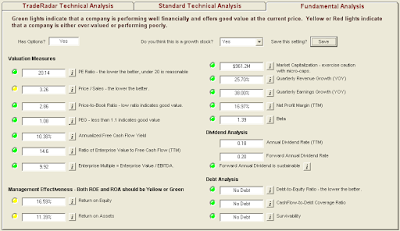 [ Click to see larger image. ]
You will see that almost every LED is green. This indicates that the stock offers reasonable value, is exhibiting good growth, has very manageable debt and the dividend is secure. Management effectiveness, as measured by Return on Equity and Return on Assets is OK but should be a bit better for a growth stock.

The following chart is from Google Finance and shows year-over-year growth is solid while sequential growth is less impressive: 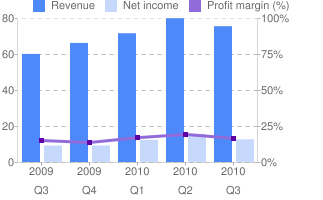 Last week the company announced Q3 earnings: revenue of $75.5 million with non-GAAP profits of 53 cents a share. This beat analyst expectations of $74.1 million and 49 cents.

In keeping with the caution and reined in projections that many semiconductor companies have expressed lately, Power Integrations has guided downward for Q4: revenue falling back to a range of $67 million to $73 million; the Street had been expecting $73.5 million.

The near term seems to be somewhat challenging for POWI but the company does have a couple of things going for it.

The company's chips are used in such a widely diversified array of products that the risk of problems in one sector of the electronics industry are unlikely to create to major headwinds. Every electronics products requires power - whether to charge batteries or to directly provide the juice to run the product. Power Integrations has ICs for both major categories.

As is increasingly the style these days, Power Integrations is trumpeting their clean tech credentials. The companies products are designed to ensure that power is not wasted. The company's energy-efficiency technology could be a positive differentiator.

Though the company's near-term forward guidance has been lackluster, investors seem to be overlooking the weakness. The stock has been strong for two months now, having bounced off a bottom established in early September. Investors must be focusing on the value aspects of the stock and betting on the a resurgence in the semiconductor sector. We'll have to see if the move is strong enough to surge above the 200-DMA and confirm the bullish reversal.

Disclosure: no position at time of writing