May 10, 2010
Markets had pulled back to the point where they were flirting with a "correction" - a decline of 10% or more. The NASDAQ had already achieved that dubious distinction.

I have written a good number of posts defending the use of ProShares leveraged ETFs including the inverse or short variety. And I put my money where my mouth is - I almost always have one or two ProShares ETFs in my portfolio.  This time, however, is different.

As stocks dropped, the double long Ultra ProShares ETFs in my portfolio hit stops and were sold. But I could not immediately switch over to the double short ETFs. The reason why can be summed up in one word: trend.

Look as this weekly chart of the NASDAQ 100. I have drawn two trend lines on it and both lines reflect the bullish trend that has been in place for the last year. 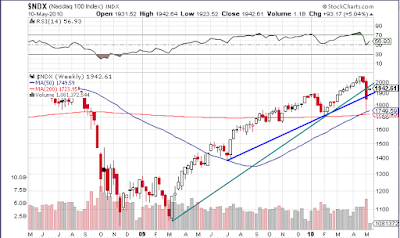 The green trend line starts at the March 2009 low and touches the early February 2010 low. According to this trend line, the NAZ has broken to the downside but has nearly recovered. So it is unclear if this is a true change in trend, from bull to bear.

The March 2009 low was a really extreme point so it's validity in trend analysis may be questionable. The blue line, therefore, identifies an alternate trend line, one that starts at the mid-July 2009 low and touches the same early February 2010 low. According to this analysis, the NASDAQ 100 touched the trend line last week and, after Monday's powerful rally, is now comfortably above it again. Note that the index is now between the two trend lines and also above the support line at 1900.

My personal investing style, as you may have guessed, requires being comfortable that a definite trend is in place. I'm not particularly enthusiastic about very short-term trades, even with leveraged ETFs.

As I look at a chart like that above, I am not confident that the bullish trend has given way and that a new bearish trend has been established. The result is that, while I wait for confirmation on the direction of the latest trend, I can't yet commit to the ultra short ETFs.