October 03, 2009
A second week of declining markets has investors questioning whether stocks have come too far too fast. A week of disappointing economic reports has bears saying "I told you so." Is the rally over?

We look for clues in some of the charts that follow. 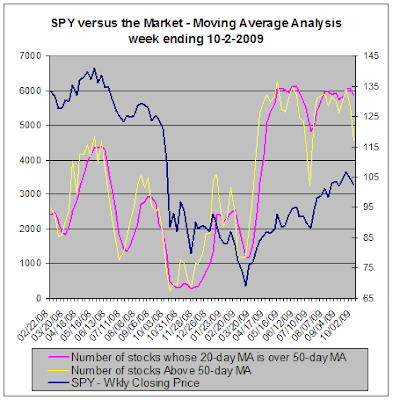 I look at this chart with mixed emotions. On the one hand, I am heartened that the number of stocks whose 20-DMA is over their 50-DMA (the magenta line) is holding up quite well despite two weeks of declines. On the other hand, with the significant drop in the number of stocks above their 50-DMA, I can't help but think that stocks will continue to drop until we see that magenta line dip more noticeably. After all, the odd situation where our magenta line stays up while the yellow line drops is the result of stocks falling precipitously and the fact that their moving averages now need to "catch up" with the recent moves. 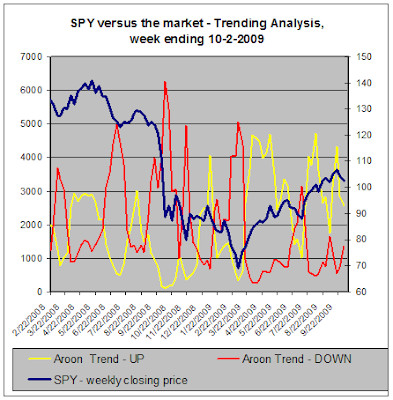 Here again, I feel like the move isn't complete until the red line and the yellow line cross or at least touch. In other words, for this decline to play out fully and set up the next buying opportunity, we need to see still fewer stocks in up-trends and more stocks in down-trends.

As things stand today, our statistics show stocks holding up better than can be expected after two weeks of selling.

But really, what should be expected?

Sentiment, however, seems to have fallen off a cliff. After poor reports on employment from ADP, higher than expected weekly claims, a weaker Non-Farm Payrolls report, slumping consumer confidence, weaker than expected Chicago PMI and ISM Manufacturing reports, investors seem to have thrown in the towel.

This coming week has little in the way of economic reports but third quarter earnings will be due in a few weeks. As investors worry themselves this week with little data to chew on, stocks could continue to work their way lower. The charts above lead me to believe that the S&P 500 could easily fall below 1000 before a (hopefully) better than expected earnings season reignites the rally.

So if your outlook is short-term, watching support levels on the daily charts could easily push you into selling stocks very soon. If you have a little longer term outlook, look at the weekly charts. You will see that the upward-moving trend-line is still intact. So far, at least, there's no need to panic.