Software a defensive sector? Who knew?

I often write about tech stocks on this blog. Today I read an interview with one of the most well-known managers of a technology mutual fund.

The Wall Street Journal had a conversation with Paul Wick, manager of the Seligman Communications and Information fund (SLMCX). With 20 years as manager of this fund, he has consistently ranked in or near the top 10% among his peers.

Mr. Wick makes several points that will be familiar to fans of tech stocks. He comments that many tech stocks have "grown up" (my phrase), have solid business models and have reacted to the downturn by cutting costs and finding other ways to remain profitable. He contends that the tide is turning for many tech sectors and, therefore, the run-up in many tech stocks is justified. Even some of the lower quality companies have reasons to bounce.

These are ideas that are not unusual though they are open to dispute among those who feel less bullish on the economy in general or tech stocks in particular.

Prompted by the WSJ, Mr Wick described why software is his favorite sector and the best business in technology:
As he went through this list, it occurred to me that he was describing a defensive sector, one that is resilient and has a growth component but still has many of the characteristics of a defensive investment including cash on hand, pricing power, a wide moat (stickiness) and non-correlation. All of these factors tend to reduce risk.

Another aspect of a defensive sector is that it will grow but not as fast as more "rocket-stock" oriented sectors. For example, the semiconductor and networking sectors have outperformed the software sector this year. We compare them in the chart below with the sectors represented by the iShares Software ETF (IGV), the Semiconductor ETF (IGW) and the Networking and Media ETF (IGN). 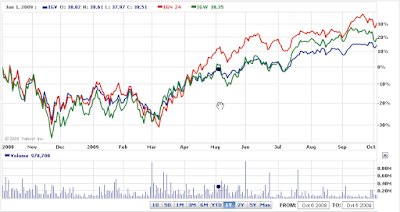 At the worst points in the downturn, software managed to do a bit better than the other two sectors though they sometimes traded places. At no time, however, was software the worst performing sector. Subsequently, software delivered the kind of growth tech investors generally expect in return for the kind of volatility and risk tech often exhibits.

The lesson here is that if you are building a tech portfolio, it is important to include the software sector either in the form of an ETF like IGV or via a carefully researched selection of software stocks. It can help smooth out the overall performance and provide some confidence when the economic environment gets shaky.

Anonymous said…
Dear,
I want to make 1 guest post in your site, if you permit me. The post contains 350 words above and it is totally unique as it is written by my content writers.

Please contact me at ericasmith568(at)gmail.com soon. Moreover, I will place your link in one of my finance sites.