July 19, 2009
The stock market sure rallied last week. Can it continue at this pace?

Monday belonged to the financials. Analyst Meredith Whitney actually came out with a Buy rating. It was on Goldman Sachs (GS) and, delivering on heightened expectations, Goldman came through with a killer earnings report.

Wednesday was all about tech. As reported Tuesday evening, Intel not only beat on earnings but they also delivered a forecast that fired up the market. Their CEO's comments on expectations of a firmer second half and the appearance that customers seem to be restocking inventories at a higher than anticipated rate were exactly the kind of positive words investors were looking for. As the week progressed, Google (GOOG) beat but saw their shares droop and IBM beat and saw their shares jump. For the most part then, tech was on a roll and the entire market went along for the ride.

So where are the markets today and where might they be going? We look for clues in some of the charts that follow. 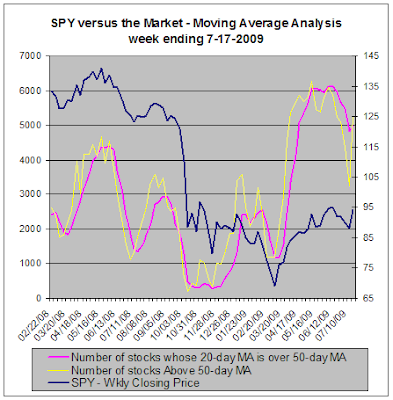 Major averages gained roughly 7% last week and erased the losses experienced over the last four weeks. You can see how the number of stocks over their 50-day moving average jumped by more than we've seen since we began tracking these statistics and also jumped above the line that shows the number of stocks whose 20-day MA is above their 50-day MA. This is typically a bullish signal and implies there is more room to rally. 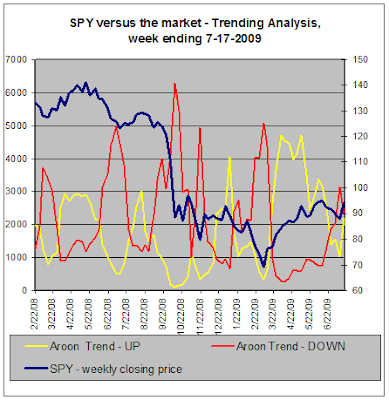 Two weeks ago, the number of stocks in strong up-trends hit a three month low and I was wondering if we were due for a bounce. Last week we definitely got the bounce and our trend statistics switched directions: a falling line showing fewer stocks in down-trends and a rising line showing lots more in up-trends. Neither are at extreme levels yet so this indicator also implies the rally has room to run.

The fears of a head-and-shoulders have passed. Market sentiment is reasonably positive. Even the financials are back in favor despite the troubles at CIT. And an unlikely source of strength last week was the fact that housing starts and building permits came in much better than expected. All in all, investors had good reason to be happy.

With few economic reports on tap this week, earnings will be the main focus. With earnings expectations still fairly low, it's likely that a good percentage of companies will beat. That will undoubtedly serve to further prop up this market. Our statistics, as outlined above, show that the market is not yet overvalued and could add to its gains. After such a strong surge, though, it would be no surprise to see stocks slow down for a bit. It might just be the pause that refreshes, however, before reaching new highs.

Anonymous said…
I found this site using [url=http://google.com]google.com[/url] And i want to thank you for your work. You have done really very good site. Great work, great site! Thank you!