Weekly Review - the correction picks up speed, how far will stocks fall?

This week a worse than expected non-farm payrolls report knocked the wind out of the sails of the stock market. The fact that the best performing index, the NASDAQ, fell 2.3% shows what a lousy week it was. Meanwhile, the unemployment rate, currently at 9.5%, continues its steady march toward double digits. Against this backdrop, it should not be surprising that consumer confidence, as well as the stock market, fell over the past month.

With the second quarter finishing up earlier this week it is understandable that some profits might be taken after stocks turned in strong performances. The S&P 500 gained 15% and the NASDAQ gained 20%. Ominously, oil gained 41%.

It is no doubt that stocks are now in a correction. The question is: how far will they fall? We look for clues in some of the charts that follow. 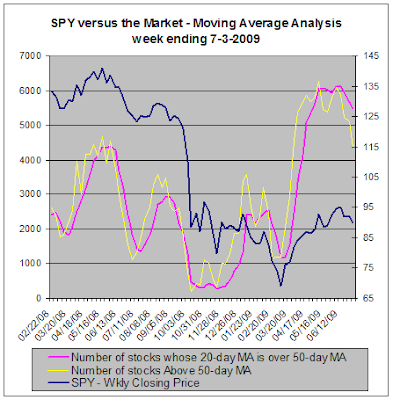 The chart above shows our analysis of the universe of stocks we evaluate, roughly 7200 of them. It's pretty clear that weakness has persisted over the last few weeks and performance was at its worst during this holiday shortened week. As lousy as this chart looks, there are still roughly 60% of stocks trading above their 50-day moving average. Not great but not bad. Unfortunately, there is no sign that the deterioration in stock prices is slowing down. Indeed, in order to complete this move, it looks as if the number of stocks whose 20-day MA is above their 50-day MA needs to move lower before we start to see some recovery. 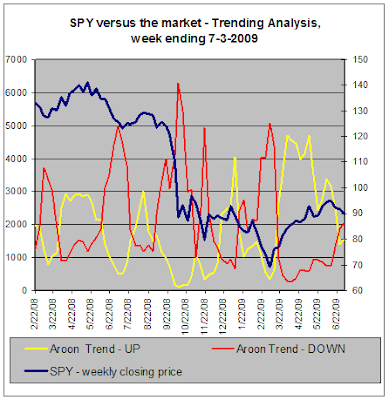 The following chart show SPY, the S&P 500 SPDR ETF. I have drawn two green lines on the chart: the horizontal one is a support line and the descending line shows the down-trend that is being carved out. Put the two together and we begin see a triangle emerge. Falling below that support line would imply that we could see another 9% or 10% decline from that level. 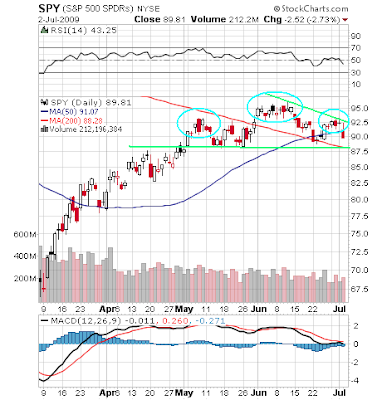 Some bloggers are seeing a head and shoulders pattern developing on the S&P 500. I have circled the left shoulder, the head and what is starting to strongly resemble a right shoulder in light blue. The implication here is also for a 10% drop from the neckline which just happens to be the same horizontal green line forming the base of the triangle.

With respect to moving averages, SPY has dropped below its 50-DMA but is still above its 200-DMA. With the 200-DMA still clearly pointed downward, it's not hard to anticipate a continuing correction at this point

Our charts show stocks caught in a reversal. The market hit a peak a month ago and has been steadily drooping since. Luckily the NASDAQ is looking much better than the S&P 500 so there is hope this correction will not be too deep.

Economic reports coming up this week are modest so it is unlikely they might light a fire under stocks. We will be seeing the ISM Services report, consumer credit, initial jobless claims, the trade balance and the University of Michigan consumer sentiment index. No big hitters like last week's non-farm payrolls report.

So we have had some unpleasant surprises in several economic reports while most others are slowing their deterioration or even starting to show some small amount of strength. In the meantime, stocks are in a down move that needs to play out before any recovery can begin.

I suspect there will be another week or so of weakness then we will need to throw ourselves on the mercy of earnings season. This week, earnings reports will be light but they will soon be ramping up as the second quarter earnings season kicks off in earnest. Until then, though, there isn't much to reassure bulls and the bears will most likely continue to brazenly roam the Street.