Weekly Review - damage is done, time for a turnaround?

July 12, 2009
Well, I'm swamped with another renovation project in my 100-year old house. This time I have a deadline as the wife has arranged to host a 60th anniversary party for her parents. So if you've noticed that the posting here has been a bit anemic lately, it's because I've too busy with the hammer and nails.

Today I demolished a ceiling. I pulled down a bunch of mismatched acoustical tiles and discovered that the original plaster was cracked and falling off the lathe. As I took the ceiling down piece by piece, I started thinking about how the market has been cracking and how, over the last four weeks, piece by piece the different sectors have have been succumbing to this correction, failing to make new highs and falling through initial support levels.

This week there was actually some decent economic news and the reaction from investors was a big "ho hum". Weekly jobless claims finally fell below 600,000 for the first time since January. The ISM index, though still less than 50, came in better than expected at 47. The trade numbers also surprised with the trade deficit decreasing and exports turning out much better than anticipated.

Nevertheless, stocks declined again this week. It's been a solid month now of declines. Major averages have fallen to serious support. If they fall further, it could be a long way down. Which way next? We look for clues in some of the charts that follow. 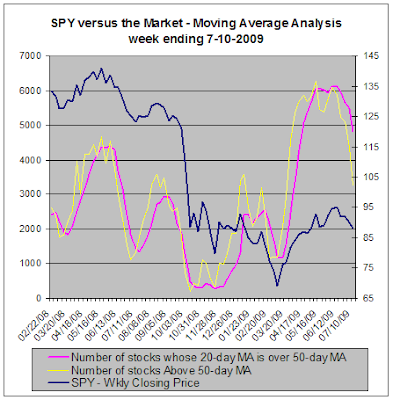 This chart illustrates the damage that has been done in the last month. The number of stocks above their 50-day moving average has dropped to levels last seen in late 2008 and early in 2009. It is surprising to me we haven't seem some kind of bounce by now. Last week I proposed that the correction needed another week to play out. This chart makes it look like we might still need a bit more time 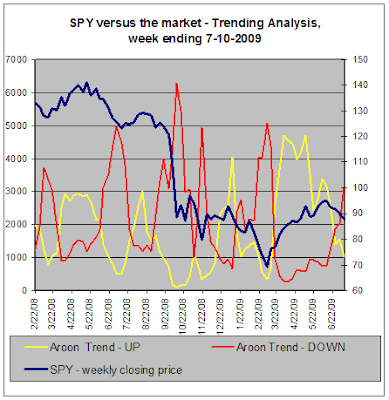 Last week I provided a chart showing SPY, the S&P 500 SPDR ETF. I diagrammed a potential head and shoulders and a significant level of support in the area around $88. Sure enough, SPY has halted its decline in the vicinity of $88. That's a hopeful sign. Unfortunately, it is still threatening to fulfill the head and shoulders and is riding its downward trending 200-day MA. These are signs that we are certainly not out of the woods yet.

Our statistics show that we should be coming to the end of this correction fairly soon. With earnings season starting to ramp up, there will be plenty of opportunities for markets to react to the performance and forecasts of bellwether stocks. This coming week will see some major financial companies reporting as well important tech companies like Google, Intel and IBM.

There will be some significant economic reports this week, too. We will see PPI, Retail Sales, CPI, Industrial Production, initial jobless claims and Housing Starts, as well as the minutes from the June 24 FOMC meeting.

So with stocks teetering on the brink of another 10% decline, we will look for a week full of earnings and economic catalysts to potentially turn things around.