July 29, 2009
The Durable Goods report for June was released today. What did it say about the tech sector?

The last couple of months have shown that the decline in tech was moderating and indeed some improvement was in evidence. Did that trend continue?

Many analysts say that new orders are great but shipments are what really count. The following chart shows shipments for the tech sector in general as represented by the Computers and electronic products category. 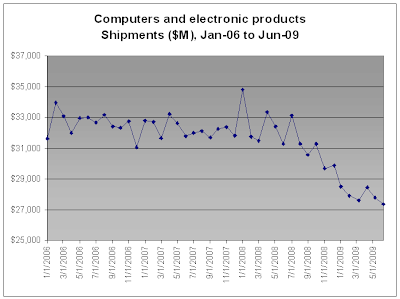 The results here are alarming. Shipments have reached a three year low. The recent upswing has been undone.

The next chart shows shipments in the semiconductor sector. There was a big surge in April and now two consecutive months when shipments have decreased. The only consolation is that at least we didn't hit a new low.

At last, some good news. Here in the Computers and related products category, shipments actually increased last month. The chart below shows what looks like a serious bottom being made and we are grateful for that. 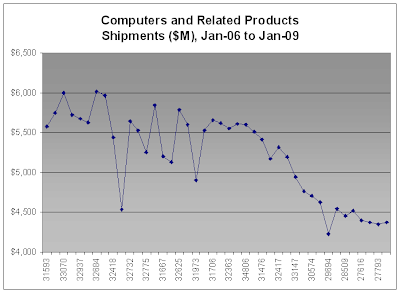 The following chart shows new orders for the tech sector in general. After hitting a multi-year low, new orders have increased and though we are not at a new low it now seems like the downward trend is resuming. 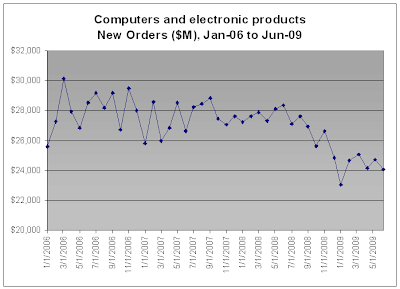 The next chart shows new orders for the Computers category. Here we had a decrease last month but the situation doesn't really look too bad at all. The decrease was very small and new orders remain around the highest level we have seen in seven months. 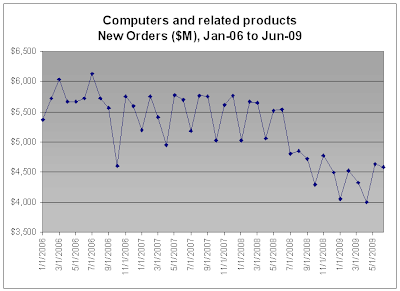 First, the bad news: for the tech sector as a whole, long term trends are still looking weak.

Now the good news: there are green shoots in the Computers category. This is the only area in the charts above where improvement seems to be ongoing.

Interestingly, we have now seen a surge in Semiconductors followed by strength in Computers. So semiconductors did prove to be a leading indicator in this case. With Semiconductor shipments now weakening, let's hope that the seasonal upturn suggested by Intel does actually play out. Otherwise, this is not a good sign at all.

Given that this data is from last month, it is worth referencing the current earnings season. We have seen plenty of tech companies beat expectations; some have even provided positive guidance. Unfortunately, the charts above clearly indicate that the entire tech sector is not completely healthy yet. There are certainly pockets of strength but overall, tech is not yet out of the woods. On the other hand, are there any sectors that are doing appreciably better?